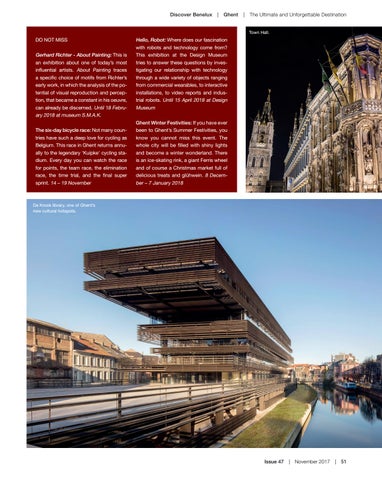 Gerhard Richter - About Painting: This is an exhibition about one of today’s most influential artists. About Painting traces a specific choice of motifs from Richter’s early work, in which the analysis of the potential of visual reproduction and perception, that became a constant in his oeuvre, can already be discerned. Until 18 February 2018 at museum S.M.A.K. The six-day bicycle race: Not many countries have such a deep love for cycling as Belgium. This race in Ghent returns annually to the legendary 'Kuipke' cycling stadium. Every day you can watch the race for points, the team race, the elimination race, the time trial, and the final super sprint. 14 – 19 November

Hello, Robot: Where does our fascination with robots and technology come from? This exhibition at the Design Museum tries to answer these questions by investigating our relationship with technology through a wide variety of objects ranging from commercial wearables, to interactive installations, to video reports and industrial robots. Until 15 April 2018 at Design Museum Ghent Winter Festivities: If you have ever been to Ghent’s Summer Festivities, you know you cannot miss this event. The whole city will be filled with shiny lights and become a winter wonderland. There is an ice-skating rink, a giant Ferris wheel and of course a Christmas market full of delicious treats and glühwein. 8 December – 7 January 2018