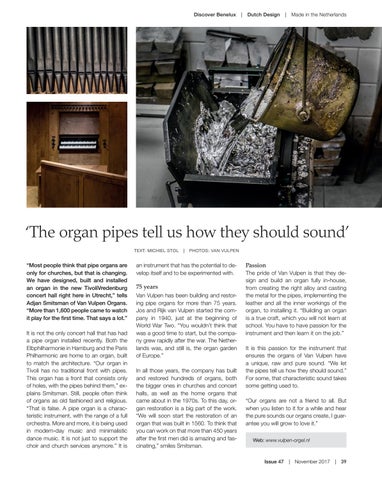 ‘The organ pipes tell us how they should sound’ TEXT: MICHIEL STOL  |  PHOTOS: VAN VULPEN

“Most people think that pipe organs are only for churches, but that is changing. We have designed, built and installed an organ in the new TivoliVredenburg concert hall right here in Utrecht,” tells Adjan Smitsman of Van Vulpen Organs. “More than 1,600 people came to watch it play for the first time. That says a lot.” It is not the only concert hall that has had a pipe organ installed recently. Both the Elbphilharmonie in Hamburg and the Paris Philharmonic are home to an organ, built to match the architecture. “Our organ in Tivoli has no traditional front with pipes. This organ has a front that consists only of holes, with the pipes behind them,” explains Smitsman. Still, people often think of organs as old fashioned and religious. “That is false. A pipe organ is a characteristic instrument, with the range of a full orchestra. More and more, it is being used in modern-day music and minimalistic dance music. It is not just to support the choir and church services anymore.” It is

an instrument that has the potential to develop itself and to be experimented with.

75 years Van Vulpen has been building and restoring pipe organs for more than 75 years. Jos and Rijk van Vulpen started the company in 1940, just at the beginning of World War Two. “You wouldn’t think that was a good time to start, but the company grew rapidly after the war. The Netherlands was, and still is, the organ garden of Europe.” In all those years, the company has built and restored hundreds of organs, both the bigger ones in churches and concert halls, as well as the home organs that came about in the 1970s. To this day, organ restoration is a big part of the work. “We will soon start the restoration of an organ that was built in 1560. To think that you can work on that more than 450 years after the first men did is amazing and fascinating,” smiles Smitsman.

Passion The pride of Van Vulpen is that they design and build an organ fully in-house, from creating the right alloy and casting the metal for the pipes, implementing the leather and all the inner workings of the organ, to installing it. “Building an organ is a true craft, which you will not learn at school. You have to have passion for the instrument and then learn it on the job.” It is this passion for the instrument that ensures the organs of Van Vulpen have a unique, raw and pure sound. “We let the pipes tell us how they should sound.” For some, that characteristic sound takes some getting used to. “Our organs are not a friend to all. But when you listen to it for a while and hear the pure sounds our organs create, I guarantee you will grow to love it.” Web: www.vulpen-orgel.nl