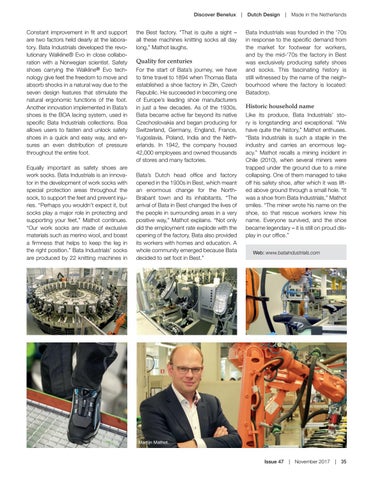 Constant improvement in fit and support are two factors held dearly at the laboratory. Bata Industrials developed the revolutionary Walkline® Evo in close collaboration with a Norwegian scientist. Safety shoes carrying the Walkline® Evo technology give feet the freedom to move and absorb shocks in a natural way due to the seven design features that stimulate the natural ergonomic functions of the foot. Another innovation implemented in Bata’s shoes is the BOA lacing system, used in specific Bata Industrials collections. Boa allows users to fasten and unlock safety shoes in a quick and easy way, and ensures an even distribution of pressure throughout the entire foot. Equally important as safety shoes are work socks. Bata Industrials is an innovator in the development of work socks with special protection areas throughout the sock, to support the feet and prevent injuries. “Perhaps you wouldn’t expect it, but socks play a major role in protecting and supporting your feet,” Mathot continues. “Our work socks are made of exclusive materials such as merino wool, and boast a firmness that helps to keep the leg in the right position.” Bata Industrials’ socks are produced by 22 knitting machines in

the Best factory. “That is quite a sight – all these machines knitting socks all day long,” Mathot laughs.

Quality for centuries For the start of Bata’s journey, we have to time travel to 1894 when Thomas Bata established a shoe factory in Zlín, Czech Republic. He succeeded in becoming one of Europe’s leading shoe manufacturers in just a few decades. As of the 1930s, Bata became active far beyond its native Czechoslovakia and began producing for Switzerland, Germany, England, France, Yugoslavia, Poland, India and the Netherlands. In 1942, the company housed 42,000 employees and owned thousands of stores and many factories. Bata’s Dutch head office and factory opened in the 1930s in Best, which meant an enormous change for the NorthBrabant town and its inhabitants. “The arrival of Bata in Best changed the lives of the people in surrounding areas in a very positive way,” Mathot explains. “Not only did the employment rate explode with the opening of the factory, Bata also provided its workers with homes and education. A whole community emerged because Bata decided to set foot in Best.”

Bata Industrials was founded in the ‘70s in response to the specific demand from the market for footwear for workers, and by the mid-‘70s the factory in Best was exclusively producing safety shoes and socks. This fascinating history is still witnessed by the name of the neighbourhood where the factory is located: Batadorp.

Historic household name Like its produce, Bata Industrials’ story is longstanding and exceptional. “We have quite the history,” Mathot enthuses. “Bata Industrials is such a staple in the industry and carries an enormous legacy.” Mathot recalls a mining incident in Chile (2010), when several miners were trapped under the ground due to a mine collapsing. One of them managed to take off his safety shoe, after which it was lifted above ground through a small hole. “It was a shoe from Bata Industrials,” Mathot smiles. “The miner wrote his name on the shoe, so that rescue workers knew his name. Everyone survived, and the shoe became legendary – it is still on proud display in our office.” Web: www.bataindustrials.com