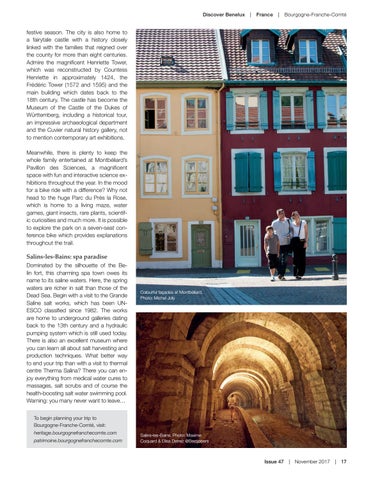 festive season. The city is also home to a fairytale castle with a history closely linked with the families that reigned over the county for more than eight centuries. Admire the magnificent Henriette Tower, which was reconstructed by Countess Henriette in approximately 1424, the Frédéric Tower (1572 and 1595) and the main building which dates back to the 18th century. The castle has become the Museum of the Castle of the Dukes of Württemberg, including a historical tour, an impressive archaeological department and the Cuvier natural history gallery, not to mention contemporary art exhibitions. Meanwhile, there is plenty to keep the whole family entertained at Montbéliard’s Pavillon des Sciences, a magnificent space with fun and interactive science exhibitions throughout the year. In the mood for a bike ride with a difference? Why not head to the huge Parc du Près la Rose, which is home to a living maze, water games, giant insects, rare plants, scientific curiosities and much more. It is possible to explore the park on a seven-seat conference bike which provides explanations throughout the trail.

Salins-les-Bains: spa paradise Dominated by the silhouette of the Belin fort, this charming spa town owes its name to its saline waters. Here, the spring waters are richer in salt than those of the Dead Sea. Begin with a visit to the Grande Saline salt works, which has been UNESCO classified since 1982. The works are home to underground galleries dating back to the 13th century and a hydraulic pumping system which is still used today. There is also an excellent museum where you can learn all about salt harvesting and production techniques. What better way to end your trip than with a visit to thermal centre Therma Salina? There you can enjoy everything from medical water cures to massages, salt scrubs and of course the health-boosting salt water swimming pool. Warning: you many never want to leave…