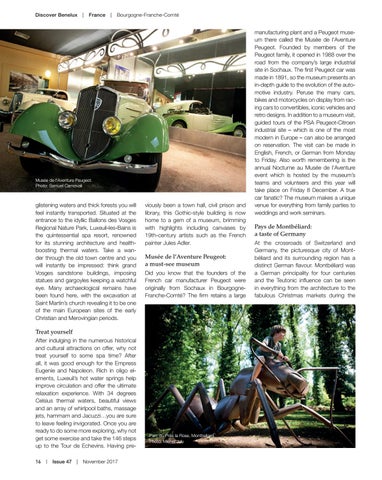 glistening waters and thick forests you will feel instantly transported. Situated at the entrance to the idyllic Ballons des Vosges Regional Nature Park, Luxeuil-les-Bains is the quintessential spa resort, renowned for its stunning architecture and healthboosting thermal waters. Take a wander through the old town centre and you will instantly be impressed: think grand Vosges sandstone buildings, imposing statues and gargoyles keeping a watchful eye. Many archaeological remains have been found here, with the excavation at Saint Martin’s church revealing it to be one of the main European sites of the early Christian and Merovingian periods.

viously been a town hall, civil prison and library, this Gothic-style building is now home to a gem of a museum, brimming with highlights including canvases by 19th-century artists such as the French painter Jules Adler.

Musée de l’Aventure Peugeot: a must-see museum Did you know that the founders of the French car manufacturer Peugeot were originally from Sochaux in BourgogneFranche-Comté? The firm retains a large

Treat yourself After indulging in the numerous historical and cultural attractions on offer, why not treat yourself to some spa time? After all, it was good enough for the Empress Eugenie and Napoleon. Rich in oligo elements, Luxeuil’s hot water springs help improve circulation and offer the ultimate relaxation experience. With 34 degrees Celsius thermal waters, beautiful views and an array of whirlpool baths, massage jets, hammam and Jacuzzi…you are sure to leave feeling invigorated. Once you are ready to do some more exploring, why not get some exercise and take the 146 steps up to the Tour de Echevins. Having pre16  |  Issue 47  |  November 2017

manufacturing plant and a Peugeot museum there called the Musée de l’Aventure Peugeot. Founded by members of the Peugeot family, it opened in 1988 over the road from the company’s large industrial site in Sochaux. The first Peugeot car was made in 1891, so the museum presents an in-depth guide to the evolution of the automotive industry. Peruse the many cars, bikes and motorcycles on display from racing cars to convertibles, iconic vehicles and retro designs. In addition to a museum visit, guided tours of the PSA Peugeot-Citroen industrial site – which is one of the most modern in Europe – can also be arranged on reservation. The visit can be made in English, French, or German from Monday to Friday. Also worth remembering is the annual Nocturne au Musée de l’Aventure event which is hosted by the museum’s teams and volunteers and this year will take place on Friday 8 December. A true car fanatic? The museum makes a unique venue for everything from family parties to weddings and work seminars.

Pays de Montbéliard: a taste of Germany At the crossroads of Switzerland and Germany, the picturesque city of Montbéliard and its surrounding region has a distinct German flavour. Montbéliard was a German principality for four centuries and the Teutonic influence can be seen in everything from the architecture to the fabulous Christmas markets during the