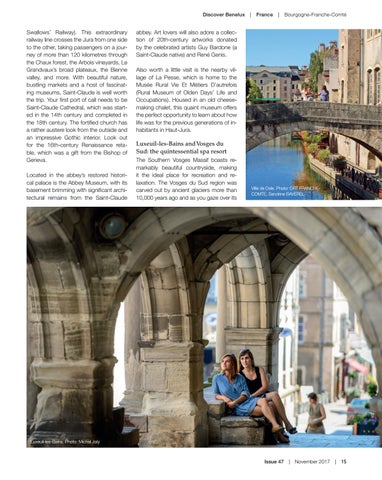 Swallows’ Railway). This extraordinary railway line crosses the Jura from one side to the other, taking passengers on a journey of more than 120 kilometres through the Chaux forest, the Arbois vineyards, Le Grandvaux’s broad plateaux, the Bienne valley, and more. With beautiful nature, bustling markets and a host of fascinating museums, Saint-Claude is well worth the trip. Your first port of call needs to be Saint-Claude Cathedral, which was started in the 14th century and completed in the 18th century. The fortified church has a rather austere look from the outside and an impressive Gothic interior. Look out for the 16th-century Renaissance retable, which was a gift from the Bishop of Geneva. Located in the abbey’s restored historical palace is the Abbey Museum, with its basement brimming with significant architectural remains from the Saint-Claude

abbey. Art lovers will also adore a collection of 20th-century artworks donated by the celebrated artists Guy Bardone (a Saint-Claude native) and René Genis. Also worth a little visit is the nearby village of La Pesse, which is home to the Musée Rural Vie Et Métiers D’autrefois (Rural Museum of Olden Days’ Life and Occupations). Housed in an old cheesemaking chalet, this quaint museum offers the perfect opportunity to learn about how life was for the previous generations of inhabitants in Haut-Jura.

Luxeuil-les-Bains and Vosges du Sud: the quintessential spa resort The Southern Vosges Massif boasts remarkably beautiful countryside, making it the ideal place for recreation and relaxation. The Vosges du Sud region was carved out by ancient glaciers more than 10,000 years ago and as you gaze over its