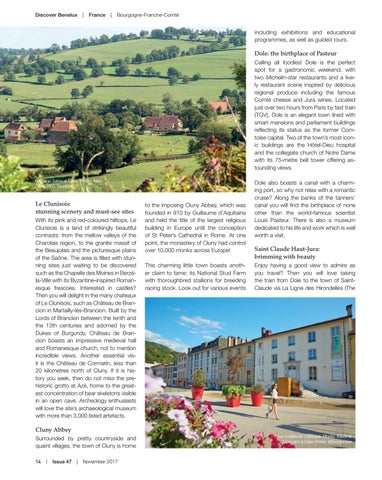 including exhibitions and educational programmes, as well as guided tours.

Dole: the birthplace of Pasteur Calling all foodies! Dole is the perfect spot for a gastronomic weekend, with two Michelin-star restaurants and a lively restaurant scene inspired by delicious regional produce including the famous Comté cheese and Jura wines. Located just over two hours from Paris by fast train (TGV), Dole is an elegant town lined with smart mansions and parliament buildings reflecting its status as the former Comtoise capital. Two of the town’s most iconic buildings are the Hôtel-Dieu hospital and the collegiate church of Notre Dame with its 75-metre bell tower offering astounding views. Paysage Saìne et Loire. Photo: Alain Doire, BFC Tourisme

Le Clunisois: stunning scenery and must-see sites With its pink and red-coloured hilltops, Le Clunisois is a land of strikingly beautiful contrasts: from the mellow valleys of the Charolais region, to the granite massif of the Beaujolais and the picturesque plains of the Saône. The area is filled with stunning sites just waiting to be discovered such as the Chapelle des Moines in Berzéla-Ville with its Byzantine-inspired Romanesque frescoes. Interested in castles? Then you will delight in the many chateaux of Le Clunisois, such as Château de Brancion in Martailly-lès-Brancion. Built by the Lords of Brancion between the tenth and the 13th centuries and adorned by the Dukes of Burgundy, Château de Brancion boasts an impressive medieval hall and Romanesque church, not to mention incredible views. Another essential visit is the Château de Cormatin, less than 20 kilometres north of Cluny. If it is history you seek, then do not miss the prehistoric grotto at Azé, home to the greatest concentration of bear skeletons visible in an open cave. Archeology enthusiasts will love the site’s archaeological museum with more than 3,000 listed artefacts.

to the imposing Cluny Abbey, which was founded in 910 by Guillaume d’Aquitaine and held the title of the largest religious building in Europe until the conception of St Peter’s Cathedral in Rome. At one point, the monastery of Cluny had control over 10,000 monks across Europe! This charming little town boasts another claim to fame: its National Stud Farm with thoroughbred stallions for breeding racing stock. Look out for various events

Dole also boasts a canal with a charming port, so why not relax with a romantic cruise? Along the banks of the tanners’ canal you will find the birthplace of none other than the world-famous scientist Louis Pasteur. There is also a museum dedicated to his life and work which is well worth a visit.

Saint Claude Haut-Jura: brimming with beauty Enjoy having a good view to admire as you travel? Then you will love taking the train from Dole to the town of SaintClaude via La Ligne des Hirondelles (The