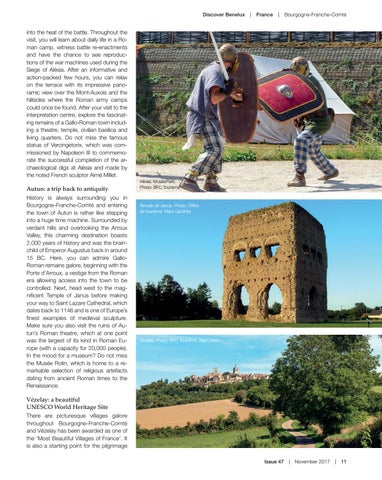 into the heat of the battle. Throughout the visit, you will learn about daily life in a Roman camp, witness battle re-enactments and have the chance to see reproductions of the war machines used during the Siege of Alésia. After an informative and action-packed few hours, you can relax on the terrace with its impressive panoramic view over the Mont-Auxois and the hillsides where the Roman army camps could once be found. After your visit to the interpretation centre, explore the fascinating remains of a Gallo-Roman town including a theatre, temple, civilian basilica and living quarters. Do not miss the famous statue of Vercingetorix, which was commissioned by Napoleon III to commemorate the successful completion of the archaeological digs at Alésia and made by the noted French sculptor Aimé Millet.

Autun: a trip back to antiquity History is always surrounding you in Bourgogne-Franche-Comté and entering the town of Autun is rather like stepping into a huge time machine. Surrounded by verdant hills and overlooking the Arroux Valley, this charming destination boasts 2,000 years of history and was the brainchild of Emperor Augustus back in around 15 BC. Here, you can admire GalloRoman remains galore, beginning with the Porte d’Arroux, a vestige from the Roman era allowing access into the town to be controlled. Next, head west to the magnificent Temple of Janus before making your way to Saint Lazare Cathedral, which dates back to 1146 and is one of Europe’s finest examples of medieval sculpture. Make sure you also visit the ruins of Autun’s Roman theatre, which at one point was the largest of its kind in Roman Europe (with a capacity for 20,000 people). In the mood for a museum? Do not miss the Musée Rolin, which is home to a remarkable selection of religious artefacts dating from ancient Roman times to the Renaissance.

Vézelay: a beautiful UNESCO World Heritage Site There are picturesque villages galore throughout Bourgogne-Franche-Comté and Vézelay has been awarded as one of the ‘Most Beautiful Villages of France’. It is also a starting point for the pilgrimage