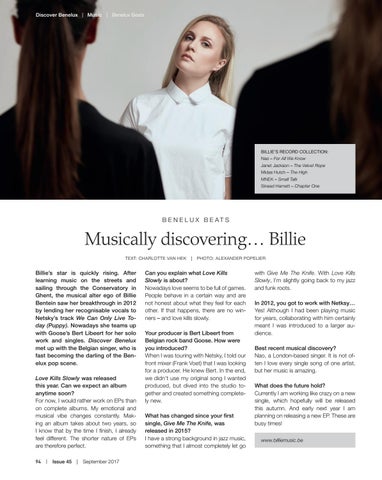 Billie’s star is quickly rising. After learning music on the streets and sailing through the Conservatory in Ghent, the musical alter ego of Billie Bentein saw her breakthrough in 2012 by lending her recognisable vocals to Netsky’s track We Can Only Live Today (Puppy). Nowadays she teams up with Goose’s Bert Libeert for her solo work and singles. Discover Benelux met up with the Belgian singer, who is fast becoming the darling of the Benelux pop scene. Love Kills Slowly was released this year. Can we expect an album anytime soon? For now, I would rather work on EPs than on complete albums. My emotional and musical vibe changes constantly. Making an album takes about two years, so I know that by the time I finish, I already feel different. The shorter nature of EPs are therefore perfect. 94  |  Issue 45  |  September 2017

Can you explain what Love Kills Slowly is about? Nowadays love seems to be full of games. People behave in a certain way and are not honest about what they feel for each other. If that happens, there are no winners – and love kills slowly. Your producer is Bert Libeert from Belgian rock band Goose. How were you introduced? When I was touring with Netsky, I told our front mixer (Frank Voet) that I was looking for a producer. He knew Bert. In the end, we didn’t use my original song I wanted produced, but dived into the studio together and created something completely new. What has changed since your first single, Give Me The Knife, was released in 2015? I have a strong background in jazz music, something that I almost completely let go

with Give Me The Knife. With Love Kills Slowly, I’m slightly going back to my jazz and funk roots. In 2012, you got to work with Netksy… Yes! Although I had been playing music for years, collaborating with him certainly meant I was introduced to a larger audience. Best recent musical discovery? Nao, a London-based singer. It is not often I love every single song of one artist, but her music is amazing. What does the future hold? Currently I am working like crazy on a new single, which hopefully will be released this autumn. And early next year I am planning on releasing a new EP. These are busy times! www.billiemusic.be