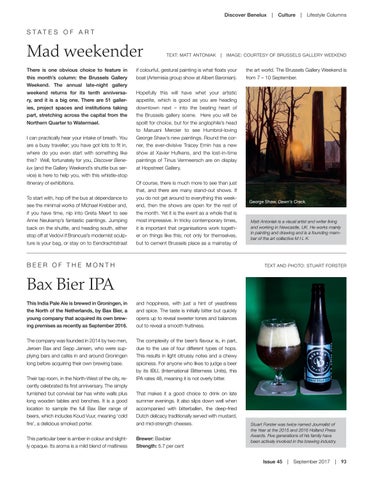 Mad weekender There is one obvious choice to feature in this month’s column: the Brussels Gallery Weekend. The annual late-night gallery weekend returns for its tenth anniversary, and it is a big one. There are 51 galleries, project spaces and institutions taking part, stretching across the capital from the Northern Quarter to Watermael. I can practically hear your intake of breath. You are a busy traveller; you have got lots to fit in, where do you even start with something like this? Well, fortunately for you, Discover Benelux (and the Gallery Weekend’s shuttle bus service) is here to help you, with this whistle-stop itinerary of exhibitions. To start with, hop off the bus at dépendance to see the minimal works of Michael Krebber and, if you have time, nip into Greta Meert to see Anne Neukamp’s fantastic paintings. Jumping back on the shuttle, and heading south, either stop off at Vedovi if Brancusi’s modernist sculpture is your bag, or stay on to Eendrachtstraat

if colourful, gestural painting is what floats your boat (Artemisia group show at Albert Baronian).

the art world. The Brussels Gallery Weekend is from 7 – 10 September.

Hopefully this will have whet your artistic appetite, which is good as you are heading downtown next – into the beating heart of the Brussels gallery scene. Here you will be spoilt for choice, but for the anglophile’s head to Maruani Mercier to see Humbrol-loving George Shaw’s new paintings. Round the corner, the ever-divisive Tracey Emin has a new show at Xavier Hufkens, and the lost-in-time paintings of Tinus Vermeersch are on display at Hopstreet Gallery. Of course, there is much more to see than just that, and there are many stand-out shows. If you do not get around to everything this weekend, then the shows are open for the rest of the month. Yet it is the event as a whole that is most impressive. In tricky contemporary times, it is important that organisations work together on things like this; not only for themselves, but to cement Brussels place as a mainstay of

Bax Bier IPA This India Pale Ale is brewed in Groningen, in the North of the Netherlands, by Bax Bier, a young company that acquired its own brewing premises as recently as September 2016.

and hoppiness, with just a hint of yeastiness and spice. The taste is initially bitter but quickly opens up to reveal sweeter tones and balances out to reveal a smooth fruitiness.

The company was founded in 2014 by two men, Jeroen Bax and Sepp Jansen, who were supplying bars and cafés in and around Groningen long before acquiring their own brewing base.

The complexity of the beer’s flavour is, in part, due to the use of four different types of hops. This results in light citrussy notes and a chewy spiciness. For anyone who likes to judge a beer by its IBU, (International Bitterness Units), this IPA rates 48, meaning it is not overly bitter.

Their tap room, in the North-West of the city, recently celebrated its first anniversary. The simply furnished but convivial bar has white walls plus long wooden tables and benches. It is a good location to sample the full Bax Bier range of beers, which includes Koud Vuur, meaning ‘cold fire’, a delicious smoked porter. This particular beer is amber in colour and slightly opaque. Its aroma is a mild blend of maltiness

That makes it a good choice to drink on late summer evenings. It also slips down well when accompanied with bitterballen, the deep-fried Dutch delicacy traditionally served with mustard, and mid-strength cheeses. Brewer: Baxbier Strength: 5.7 per cent