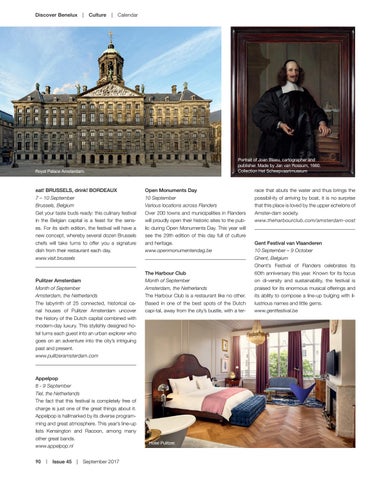 eat! BRUSSELS, drink! BORDEAUX 7 – 10 September Brussels, Belgium Get your taste buds ready: this culinary festival in the Belgian capital is a feast for the senses. For its sixth edition, the festival will have a new concept, whereby several dozen Brussels chefs will take turns to offer you a signature dish from their restaurant each day. www.visit.brussels

Pulitzer Amsterdam Month of September Amsterdam, the Netherlands The labyrinth of 25 connected, historical canal houses of Pulitzer Amsterdam uncover the history of the Dutch capital combined with modern-day luxury. This stylishly designed hotel turns each guest into an urban explorer who goes on an adventure into the city’s intriguing past and present. www.pulitzeramsterdam.com

Appelpop 8 - 9 September Tiel, the Netherlands The fact that this festival is completely free of charge is just one of the great things about it. Appelpop is hallmarked by its diverse programming and great atmosphere. This year’s line-up lists Kensington and Racoon, among many other great bands. www.appelpop.nl 90  |  Issue 45  |  September 2017

Open Monuments Day 10 September Various locations across Flanders Over 200 towns and municipalities in Flanders will proudly open their historic sites to the public during Open Monuments Day. This year will see the 29th edition of this day full of culture and heritage. www.openmonumentendag.be

The Harbour Club Month of September Amsterdam, the Netherlands The Harbour Club is a restaurant like no other. Based in one of the best spots of the Dutch capi-tal, away from the city’s bustle, with a ter-

race that abuts the water and thus brings the possibil-ity of arriving by boat, it is no surprise that this place is loved by the upper echelons of Amster-dam society. www.theharbourclub.com/amsterdam-oost

Gent Festival van Vlaanderen 10 September – 9 October Ghent, Belgium Ghent’s Festival of Flanders celebrates its 60th anniversary this year. Known for its focus on di-versity and sustainability, the festival is praised for its enormous musical offerings and its ability to compose a line-up bulging with illustrious names and little gems. www.gentfestival.be