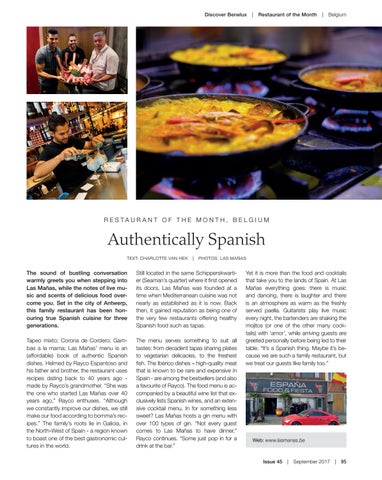 The sound of bustling conversation warmly greets you when stepping into Las Mañas, while the notes of live music and scents of delicious food overcome you. Set in the city of Antwerp, this family restaurant has been honouring true Spanish cuisine for three generations.

Still located in the same Schipperskwartier (Seaman’s quarter) where it first opened its doors, Las Mañas was founded at a time when Mediterranean cuisine was not nearly as established as it is now. Back then, it gained reputation as being one of the very few restaurants offering healthy Spanish food such as tapas.

Tapeo mixto; Corona de Cordero; Gambas a la mama; Las Mañas’ menu is an (affordable) book of authentic Spanish dishes. Helmed by Rayco Espantoso and his father and brother, the restaurant uses recipes dating back to 40 years ago made by Rayco’s grandmother. “She was the one who started Las Mañas over 40 years ago,” Rayco enthuses. “Although we constantly improve our dishes, we still make our food according to bomma’s recipes.” The family’s roots lie in Galicia, in the North-West of Spain - a region known to boast one of the best gastronomic cultures in the world.

The menu serves something to suit all tastes: from decadent tapas sharing plates to vegetarian delicacies, to the freshest fish. The Ibérico dishes – high-quality meat that is known to be rare and expensive in Spain - are among the bestsellers (and also a favourite of Rayco). The food menu is accompanied by a beautiful wine list that exclusively lists Spanish wines, and an extensive cocktail menu. In for something less sweet? Las Mañas hosts a gin menu with over 100 types of gin. “Not every guest comes to Las Mañas to have dinner,” Rayco continues. “Some just pop in for a drink at the bar.”

Yet it is more than the food and cocktails that take you to the lands of Spain. At Las Mañas everything goes: there is music and dancing, there is laughter and there is an atmosphere as warm as the freshly served paella. Guitarists play live music every night, the bartenders are shaking the mojitos (or one of the other many cocktails) with ‘amor’, while arriving guests are greeted personally before being led to their table. “It’s a Spanish thing. Maybe it’s because we are such a family restaurant, but we treat our guests like family too.”