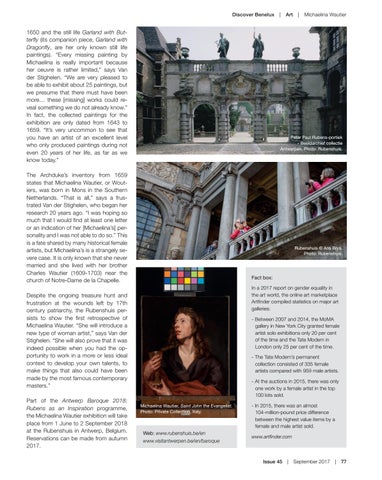 1650 and the still life Garland with Butterfly (its companion piece, Garland with Dragonfly, are her only known still life paintings). “Every missing painting by Michaelina is really important because her oeuvre is rather limited,” says Van der Stighelen. “We are very pleased to be able to exhibit about 25 paintings, but we presume that there must have been more… these [missing] works could reveal something we do not already know.” In fact, the collected paintings for the exhibition are only dated from 1643 to 1659. “It’s very uncommon to see that you have an artist of an excellent level who only produced paintings during not even 20 years of her life, as far as we know today.”

The Archduke’s inventory from 1659 states that Michaelina Wautier, or Woutiers, was born in Mons in the Southern Netherlands. “That is all,” says a frustrated Van der Stighelen, who began her research 20 years ago. “I was hoping so much that I would find at least one letter or an indication of her [Michaelina’s] personality and I was not able to do so.” This is a fate shared by many historical female artists, but Michaelina’s is a strangely severe case. It is only known that she never married and she lived with her brother Charles Wautier (1609-1703) near the church of Notre-Dame de la Chapelle.

Fact box: In a 2017 report on gender equality in the art world, the online art marketplace Artfinder compiled statistics on major art galleries:

Despite the ongoing treasure hunt and frustration at the wounds left by 17th century patriarchy, the Rubenshuis persists to show the first retrospective of Michaelina Wautier. “She will introduce a new type of woman artist,” says Van der Stighelen. “She will also prove that it was indeed possible when you had the opportunity to work in a more or less ideal context to develop your own talents, to make things that also could have been made by the most famous contemporary masters.” Part of the Antwerp Baroque 2018: Rubens as an Inspiration programme, the Michaelina Wautier exhibition will take place from 1 June to 2 September 2018 at the Rubenshuis in Antwerp, Belgium. Reservations can be made from autumn 2017.

- In 2015, there was an almost 104-million-pound price difference between the highest value items by a female and male artist sold. www.artfinder.com