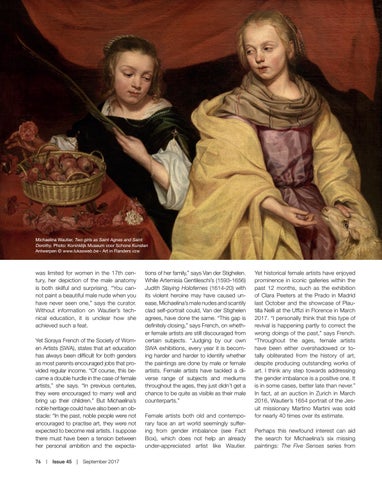 was limited for women in the 17th century, her depiction of the male anatomy is both skilful and surprising. “You cannot paint a beautiful male nude when you have never seen one,” says the curator. Without information on Wautier’s technical education, it is unclear how she achieved such a feat. Yet Soraya French of the Society of Women Artists (SWA), states that art education has always been difficult for both genders as most parents encouraged jobs that provided regular income. “Of course, this became a double hurdle in the case of female artists,” she says. “In previous centuries, they were encouraged to marry well and bring up their children.” But Michaelina’s noble heritage could have also been an obstacle: “In the past, noble people were not encouraged to practise art, they were not expected to become real artists. I suppose there must have been a tension between her personal ambition and the expecta76  |  Issue 45  |  September 2017

tions of her family,” says Van der Stighelen. While Artemisia Gentileschi’s (1593-1656) Judith Slaying Holofernes (1614-20) with its violent heroine may have caused unease, Michaelina’s male nudes and scantily clad self-portrait could, Van der Stighelen agrees, have done the same. “This gap is definitely closing,” says French, on whether female artists are still discouraged from certain subjects. “Judging by our own SWA exhibitions, every year it is becoming harder and harder to identify whether the paintings are done by male or female artists. Female artists have tackled a diverse range of subjects and mediums throughout the ages, they just didn’t get a chance to be quite as visible as their male counterparts.” Female artists both old and contemporary face an art world seemingly suffering from gender imbalance (see Fact Box), which does not help an already under-appreciated artist like Wautier.

Yet historical female artists have enjoyed prominence in iconic galleries within the past 12 months, such as the exhibition of Clara Peeters at the Prado in Madrid last October and the showcase of Plautilla Nelli at the Uffizi in Florence in March 2017. “I personally think that this type of revival is happening partly to correct the wrong doings of the past,” says French. “Throughout the ages, female artists have been either overshadowed or totally obliterated from the history of art, despite producing outstanding works of art. I think any step towards addressing the gender imbalance is a positive one. It is in some cases, better late than never.” In fact, at an auction in Zurich in March 2016, Wautier’s 1654 portrait of the Jesuit missionary Martino Martini was sold for nearly 40 times over its estimate. Perhaps this newfound interest can aid the search for Michaelina’s six missing paintings: The Five Senses series from