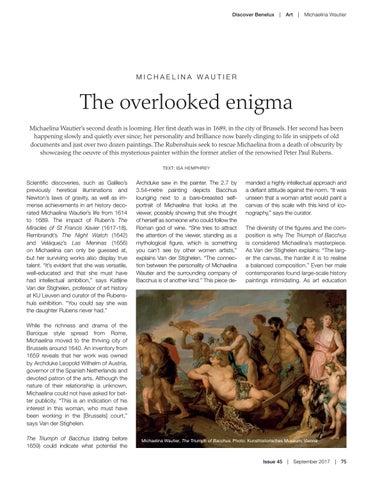 The overlooked enigma Michaelina Wautier’s second death is looming. Her first death was in 1689, in the city of Brussels. Her second has been happening slowly and quietly ever since; her personality and brilliance now barely clinging to life in snippets of old documents and just over two dozen paintings. The Rubenshuis seek to rescue Michaelina from a death of obscurity by showcasing the oeuvre of this mysterious painter within the former atelier of the renowned Peter Paul Rubens. TEXT: ISA HEMPHREY

Scientific discoveries, such as Galileo’s previously heretical illuminations and Newton’s laws of gravity, as well as immense achievements in art history decorated Michaelina Wautier’s life from 1614 to 1689. The impact of Ruben’s The Miracles of St Francis Xavier (1617-18), Rembrandt’s The Night Watch (1642) and Veláquez’s Las Meninas (1656) on Michaelina can only be guessed at, but her surviving works also display true talent. “It’s evident that she was versatile, well-educated and that she must have had intellectual ambition,” says Katlijne Van der Stighelen, professor of art history at KU Leuven and curator of the Rubenshuis exhibition. “You could say she was the daughter Rubens never had.”

Archduke saw in the painter. The 2.7 by 3.54-metre painting depicts Bacchus lounging next to a bare-breasted selfportrait of Michaelina that looks at the viewer, possibly showing that she thought of herself as someone who could follow the Roman god of wine. “She tries to attract the attention of the viewer, standing as a mythological figure, which is something you can’t see by other women artists,” explains Van der Stighelen. “The connection between the personality of Michaelina Wautier and the surrounding company of Bacchus is of another kind.” This piece de-

manded a highly intellectual approach and a defiant attitude against the norm. “It was unseen that a woman artist would paint a canvas of this scale with this kind of iconography,” says the curator. The diversity of the figures and the composition is why The Triumph of Bacchus is considered Michaelina’s masterpiece. As Van der Stighelen explains: “The larger the canvas, the harder it is to realise a balanced composition.” Even her male contemporaries found large-scale history paintings intimidating. As art education

While the richness and drama of the Baroque style spread from Rome, Michaelina moved to the thriving city of Brussels around 1640. An inventory from 1659 reveals that her work was owned by Archduke Leopold Wilhelm of Austria, governor of the Spanish Netherlands and devoted patron of the arts. Although the nature of their relationship is unknown, Michaelina could not have asked for better publicity. “This is an indication of his interest in this woman, who must have been working in the [Brussels] court,” says Van der Stighelen. The Triumph of Bacchus (dating before 1659) could indicate what potential the