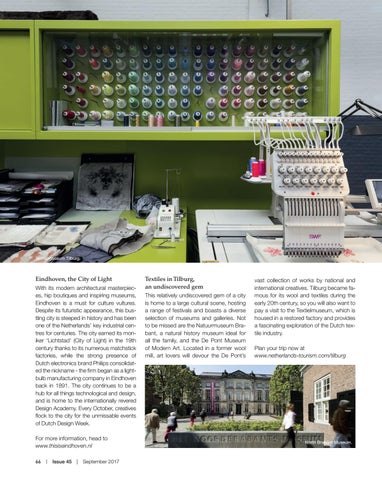 Eindhoven, the City of Light With its modern architectural masterpieces, hip boutiques and inspiring museums, Eindhoven is a must for culture vultures. Despite its futuristic appearance, this bustling city is steeped in history and has been one of the Netherlands’ key industrial centres for centuries. The city earned its moniker ‘Lichtstad’ (City of Light) in the 19th century thanks to its numerous matchstick factories, while the strong presence of Dutch electronics brand Philips consolidated the nickname - the firm began as a lightbulb manufacturing company in Eindhoven back in 1891. The city continues to be a hub for all things technological and design, and is home to the internationally revered Design Academy. Every October, creatives flock to the city for the unmissable events of Dutch Design Week. For more information, head to www.thisiseindhoven.nl 66  |  Issue 45  |  September 2017

Textiles in Tilburg, an undiscovered gem This relatively undiscovered gem of a city is home to a large cultural scene, hosting a range of festivals and boasts a diverse selection of museums and galleries. Not to be missed are the Natuurmuseum Brabant, a natural history museum ideal for all the family, and the De Pont Museum of Modern Art. Located in a former wool mill, art lovers will devour the De Pont’s

vast collection of works by national and international creatives. Tilburg became famous for its wool and textiles during the early 20th century, so you will also want to pay a visit to the Textielmuseum, which is housed in a restored factory and provides a fascinating exploration of the Dutch textile industry. Plan your trip now at www.netherlands-tourism.com/tilburg