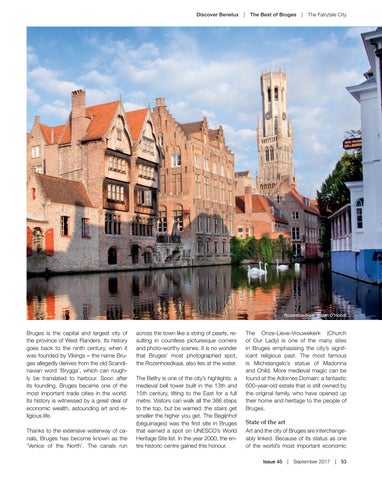 Discover Benelux  |  The Best of Bruges  |  The Fairytale City

Bruges is the capital and largest city of the province of West Flanders. Its history goes back to the ninth century, when it was founded by Vikings – the name Bruges allegedly derives from the old Scandinavian word ‘Brygga’, which can roughly be translated to harbour. Soon after its founding, Bruges became one of the most important trade cities in the world. Its history is witnessed by a great deal of economic wealth, astounding art and religious life. Thanks to the extensive waterway of canals, Bruges has become known as the ‘Venice of the North’. The canals run

across the town like a string of pearls, resulting in countless picturesque corners and photo-worthy scenes. It is no wonder that Bruges’ most photographed spot, the Rozenhoedkaai, also lies at the water. The Belfry is one of the city’s highlights: a medieval bell tower built in the 13th and 15th century, tilting to the East for a full metre. Visitors can walk all the 366 steps to the top, but be warned: the stairs get smaller the higher you get. The Begijnhof (béguinages) was the first site in Bruges that earned a spot on UNESCO’s World Heritage Site list. In the year 2000, the entire historic centre gained this honour.

The Onze-Lieve-Vrouwekerk (Church of Our Lady) is one of the many sites in Bruges emphasising the city’s significant religious past. The most famous is Michelangelo’s statue of Madonna and Child. More medieval magic can be found at the Adornes Domain: a fantastic 600-year-old estate that is still owned by the original family, who have opened up their home and heritage to the people of Bruges.

State of the art Art and the city of Bruges are interchangeably linked. Because of its status as one of the world’s most important economic Issue 45  |  September 2017  |  53