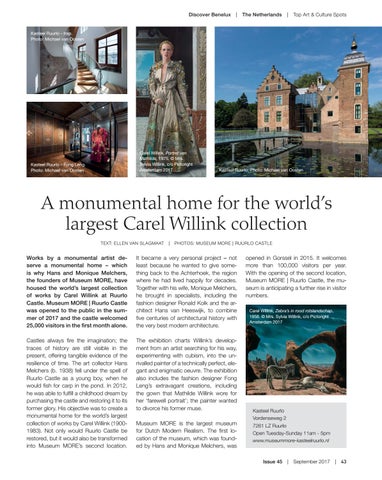 Works by a monumental artist deserve a monumental home – which is why Hans and Monique Melchers, the founders of Museum MORE, have housed the world’s largest collection of works by Carel Willink at Ruurlo Castle. Museum MORE | Ruurlo Castle was opened to the public in the summer of 2017 and the castle welcomed 25,000 visitors in the first month alone.

It became a very personal project – not least because he wanted to give something back to the Achterhoek, the region where he had lived happily for decades. Together with his wife, Monique Melchers, he brought in specialists, including the fashion designer Ronald Kolk and the architect Hans van Heeswijk, to combine five centuries of architectural history with the very best modern architecture.

Castles always fire the imagination; the traces of history are still visible in the present, offering tangible evidence of the resilience of time. The art collector Hans Melchers (b. 1938) fell under the spell of Ruurlo Castle as a young boy, when he would fish for carp in the pond. In 2012, he was able to fulfill a childhood dream by purchasing the castle and restoring it to its former glory. His objective was to create a monumental home for the world’s largest collection of works by Carel Willink (19001983). Not only would Ruurlo Castle be restored, but it would also be transformed into Museum MORE’s second location.

The exhibition charts Willink’s development from an artist searching for his way, experimenting with cubism, into the unrivalled painter of a technically perfect, elegant and enigmatic oeuvre. The exhibition also includes the fashion designer Fong Leng’s extravagant creations, including the gown that Mathilde Willink wore for her ‘farewell portrait’; the painter wanted to divorce his former muse. Museum MORE is the largest museum for Dutch Modern Realism. The first location of the museum, which was founded by Hans and Monique Melchers, was

opened in Gorssel in 2015. It welcomes more than 100,000 visitors per year. With the opening of the second location, Museum MORE | Ruurlo Castle, the museum is anticipating a further rise in visitor numbers. Carel Willink, Zebra’s in rood rotslandschap, 1958. © Mrs. Sylvia Willink, c/o Pictoright Amsterdam 2017