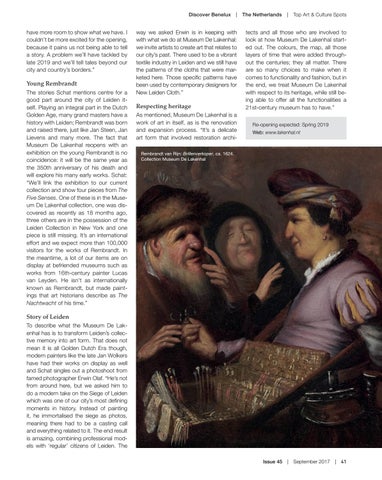 have more room to show what we have. I couldn’t be more excited for the opening, because it pains us not being able to tell a story. A problem we’ll have tackled by late 2019 and we’ll tell tales beyond our city and country’s borders.”

Young Rembrandt The stories Schat mentions centre for a good part around the city of Leiden itself. Playing an integral part in the Dutch Golden Age, many grand masters have a history with Leiden; Rembrandt was born and raised there, just like Jan Steen, Jan Lievens and many more. The fact that Museum De Lakenhal reopens with an exhibition on the young Rembrandt is no coincidence: it will be the same year as the 350th anniversary of his death and will explore his many early works. Schat: “We’ll link the exhibition to our current collection and show four pieces from The Five Senses. One of these is in the Museum De Lakenhal collection, one was discovered as recently as 18 months ago, three others are in the possession of the Leiden Collection in New York and one piece is still missing. It’s an international effort and we expect more than 100,000 visitors for the works of Rembrandt. In the meantime, a lot of our items are on display at befriended museums such as works from 16th-century painter Lucas van Leyden. He isn’t as internationally known as Rembrandt, but made paintings that art historians describe as The Nachtwacht of his time.”

way we asked Erwin is in keeping with with what we do at Museum De Lakenhal: we invite artists to create art that relates to our city’s past. There used to be a vibrant textile industry in Leiden and we still have the patterns of the cloths that were marketed here. Those specific patterns have been used by contemporary designers for New Leiden Cloth.”

Respecting heritage As mentioned, Museum De Lakenhal is a work of art in itself, as is the renovation and expansion process. “It’s a delicate art form that involved restoration archi-

tects and all those who are involved to look at how Museum De Lakenhal started out. The colours, the map, all those layers of time that were added throughout the centuries; they all matter. There are so many choices to make when it comes to functionality and fashion, but in the end, we treat Museum De Lakenhal with respect to its heritage, while still being able to offer all the functionalities a 21st-century museum has to have.” Re-opening expected: Spring 2019 Web: www.lakenhal.nl

Story of Leiden To describe what the Museum De Lakenhal has is to transform Leiden’s collective memory into art form. That does not mean it is all Golden Dutch Era though, modern painters like the late Jan Wolkers have had their works on display as well and Schat singles out a photoshoot from famed photographer Erwin Olaf. “He’s not from around here, but we asked him to do a modern take on the Siege of Leiden which was one of our city’s most defining moments in history. Instead of painting it, he immortalised the siege as photos, meaning there had to be a casting call and everything related to it. The end result is amazing, combining professional models with ‘regular’ citizens of Leiden. The Issue 45  |  September 2017  |  41