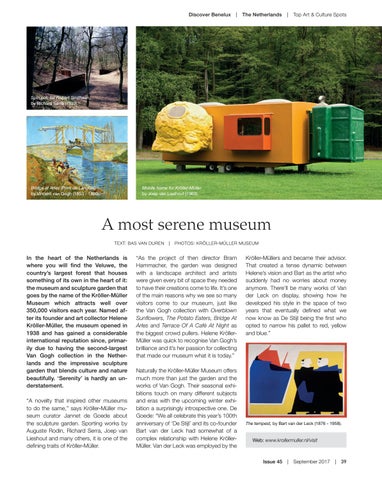 In the heart of the Netherlands is where you will find the Veluwe, the country’s largest forest that houses something of its own in the heart of it: the museum and sculpture garden that goes by the name of the Kröller-Müller Museum which attracts well over 350,000 visitors each year. Named after its founder and art collector Helene Kröller-Müller, the museum opened in 1938 and has gained a considerable international reputation since, primarily due to having the second-largest Van Gogh collection in the Netherlands and the impressive sculpture garden that blends culture and nature beautifully. ‘Serenity’ is hardly an understatement. “A novelty that inspired other museums to do the same,” says Kröller-Müller museum curator Jannet de Goede about the sculpture garden. Sporting works by Auguste Rodin, Richard Serra, Joep van Lieshout and many others, it is one of the defining traits of Kröller-Müller.

“As the project of then director Bram Hammacher, the garden was designed with a landscape architect and artists were given every bit of space they needed to have their creations come to life. It’s one of the main reasons why we see so many visitors come to our museum, just like the Van Gogh collection with Overblown Sunflowers, The Potato Eaters, Bridge At Arles and Terrace Of A Café At Night as the biggest crowd pullers. Helene KröllerMüller was quick to recognise Van Gogh’s brilliance and it’s her passion for collecting that made our museum what it is today.” Naturally the Kröller-Müller Museum offers much more than just the garden and the works of Van Gogh. Their seasonal exhibitions touch on many different subjects and eras with the upcoming winter exhibition a surprisingly introspective one. De Goede: “We all celebrate this year’s 100th anniversary of ‘De Stijl’ and its co-founder Bart van der Leck had somewhat of a complex relationship with Helene KröllerMüller. Van der Leck was employed by the

Kröller-Müllers and became their advisor. That created a tense dynamic between Helene’s vision and Bart as the artist who suddenly had no worries about money anymore. There’ll be many works of Van der Leck on display, showing how he developed his style in the space of two years that eventually defined what we now know as De Stijl being the first who opted to narrow his pallet to red, yellow and blue.”