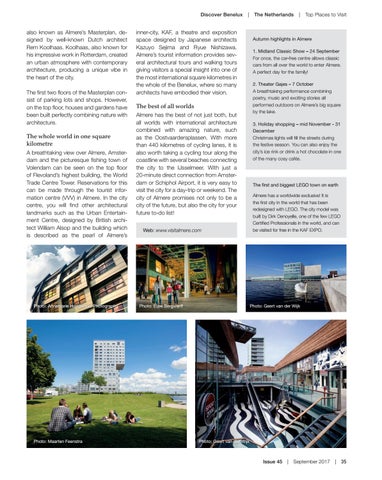 also known as Almere’s Masterplan, designed by well-known Dutch architect Rem Koolhaas. Koolhaas, also known for his impressive work in Rotterdam, created an urban atmosphere with contemporary architecture, producing a unique vibe in the heart of the city. The first two floors of the Masterplan consist of parking lots and shops. However, on the top floor, houses and gardens have been built perfectly combining nature with architecture.

The whole world in one square kilometre A breathtaking view over Almere, Amsterdam and the picturesque fishing town of Volendam can be seen on the top floor of Flevoland’s highest building, the World Trade Centre Tower. Reservations for this can be made through the tourist information centre (VVV) in Almere. In the city centre, you will find other architectural landmarks such as the Urban Entertainment Centre, designed by British architect William Alsop and the building which is described as the pearl of Almere’s

inner-city, KAF, a theatre and exposition space designed by Japanese architects Kazuyo Sejima and Ryue Nishizawa. Almere’s tourist information provides several architectural tours and walking tours giving visitors a special insight into one of the most international square kilometres in the whole of the Benelux, where so many architects have embodied their vision.

The best of all worlds Almere has the best of not just both, but all worlds with international architecture combined with amazing nature, such as the Oostvaardersplassen. With more than 440 kilometres of cycling lanes, it is also worth taking a cycling tour along the coastline with several beaches connecting the city to the IJsselmeer. With just a 20-minute direct connection from Amsterdam or Schiphol Airport, it is very easy to visit the city for a day-trip or weekend. The city of Almere promises not only to be a city of the future, but also the city for your future to-do list!  Web: www.visitalmere.com

Autumn highlights in Almere 1. Midland Classic Show – 24 September  For once, the car-free centre allows classic cars from all over the world to enter Almere. A perfect day for the family!  2. Theater Gajes – 7 October  A breathtaking performance combining poetry, music and exciting stories all performed outdoors on Almere’s big square by the lake.  3. Holiday shopping – mid November - 31 December Christmas lights will fill the streets during the festive season. You can also enjoy the city’s ice rink or drink a hot chocolate in one of the many cosy cafés.

The first and biggest LEGO town on earth Almere has a worldwide exclusive! It is the first city in the world that has been redesigned with LEGO. The city model was built by Dirk Denoyelle, one of the few LEGO Certified Professionals in the world, and can be visited for free in the KAF EXPO.