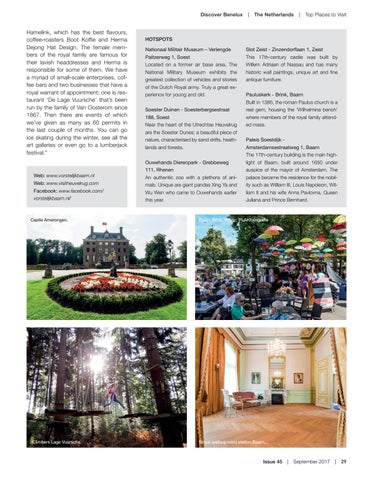 Hamelink, which has the best flavours, coffee-roasters Boot Koffie and Herma Dejong Hat Design. The female members of the royal family are famous for their lavish headdresses and Herma is responsible for some of them. We have a myriad of small-scale enterprises, coffee bars and two businesses that have a royal warrant of appointment; one is restaurant ‘De Lage Vuursche’ that’s been run by the family of Van Oosterom since 1867. Then there are events of which we’ve given as many as 60 permits in the last couple of months. You can go ice skating during the winter, see all the art galleries or even go to a lumberjack festival.”

HOTSPOTS Nationaal Militair Museum – Verlengde Paltzerweg 1, Soest Located on a former air base area, The National Military Museum exhibits the greatest collection of vehicles and stories of the Dutch Royal army. Truly a great experience for young and old. Soester Duinen - Soesterbergsestraat 188, Soest Near the heart of the Utrechtse Heuvelrug are the Soester Dunes; a beautiful piece of nature, characterised by sand drifts, heathlands and forests. Ouwehands Dierenpark - Grebbeweg 111, Rhenen An authentic zoo with a plethora of animals. Unique are giant pandas Xing Ya and Wu Wen who came to Ouwehands earlier this year.

Slot Zeist - Zinzendorflaan 1, Zeist This 17th-century castle was built by Willem Adriaan of Nassau and has many historic wall paintings, unique art and fine antique furniture. Pauluskerk - Brink, Baarn Built in 1385, the roman Paulus church is a real gem, housing the ‘Wilhelmina bench’ where members of the royal family attended mass. Paleis Soestdijk Amsterdamsestraatweg 1, Baarn The 17th-century building is the main highlight of Baarn, built around 1650 under auspice of the mayor of Amsterdam. The palace became the residence for the nobility such as William III, Louis Napoleon, William II and his wife Anna Pavlovna, Queen Juliana and Prince Bernhard.