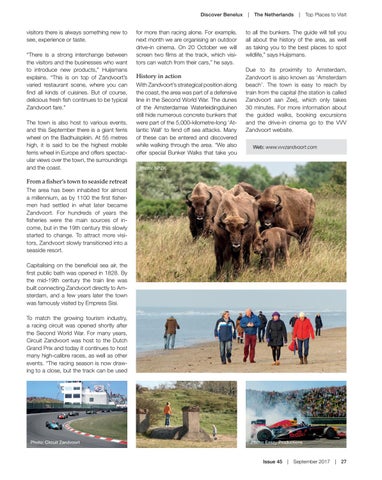 visitors there is always something new to see, experience or taste. “There is a strong interchange between the visitors and the businesses who want to introduce new products,” Huijsmans explains. “This is on top of Zandvoort’s varied restaurant scene, where you can find all kinds of cuisines. But of course, delicious fresh fish continues to be typical Zandvoort fare.” The town is also host to various events, and this September there is a giant ferris wheel on the Badhuisplein. At 55 metres high, it is said to be the highest mobile ferris wheel in Europe and offers spectacular views over the town, the surroundings and the coast.

for more than racing alone. For example, next month we are organising an outdoor drive-in cinema. On 20 October we will screen two films at the track, which visitors can watch from their cars,” he says.

History in action With Zandvoort’s strategical position along the coast, the area was part of a defensive line in the Second World War. The dunes of the Amsterdamse Waterleidingduinen still hide numerous concrete bunkers that were part of the 5,000-kilometre-long ‘Atlantic Wall’ to fend off sea attacks. Many of these can be entered and discovered while walking through the area. “We also offer special Bunker Walks that take you

to all the bunkers. The guide will tell you all about the history of the area, as well as taking you to the best places to spot wildlife,” says Huijsmans. Due to its proximity to Amsterdam, Zandvoort is also known as ‘Amsterdam beach’. The town is easy to reach by train from the capital (the station is called Zandvoort aan Zee), which only takes 30 minutes. For more information about the guided walks, booking excursions and the drive-in cinema go to the VVV Zandvoort website. Web: www.vvvzandvoort.com

From a fisher’s town to seaside retreat The area has been inhabited for almost a millennium, as by 1100 the first fishermen had settled in what later became Zandvoort. For hundreds of years the fisheries were the main sources of income, but in the 19th century this slowly started to change. To attract more visitors, Zandvoort slowly transitioned into a seaside resort. Capitalising on the beneficial sea air, the first public bath was opened in 1828. By the mid-19th century the train line was built connecting Zandvoort directly to Amsterdam, and a few years later the town was famously visited by Empress Sisi. To match the growing tourism industry, a racing circuit was opened shortly after the Second World War. For many years, Circuit Zandvoort was host to the Dutch Grand Prix and today it continues to host many high-calibre races, as well as other events. “The racing season is now drawing to a close, but the track can be used