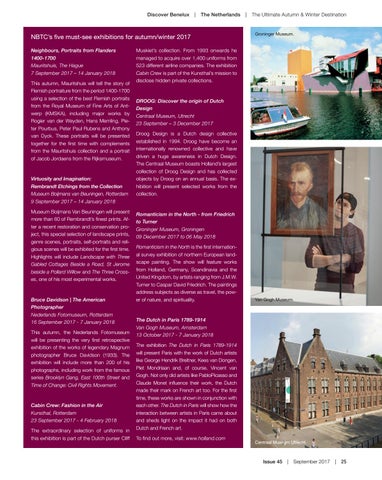 NBTC’s five must-see exhibitions for autumn/winter 2017 Neighbours, Portraits from Flanders 1400-1700 Mauritshuis, The Hague 7 September 2017 – 14 January 2018 This autumn, Mauritshuis will tell the story of Flemish portraiture from the period 1400-1700 using a selection of the best Flemish portraits from the Royal Museum of Fine Arts of Antwerp (KMSKA), including major works by Rogier van der Weyden, Hans Memling, Pieter Pourbus, Peter Paul Rubens and Anthony van Dyck. These portraits will be presented together for the first time with complements from the Mauritshuis collection and a portrait of Jacob Jordaens from the Rijksmuseum.

Virtuosity and Imagination: Rembrandt Etchings from the Collection Museum Boijmans van Beuningen, Rotterdam 9 September 2017 – 14 January 2018 Museum Boijmans Van Beuningen will present more than 60 of Rembrandt’s finest prints. After a recent restoration and conservation project, this special selection of landscape prints, genre scenes, portraits, self-portraits and religious scenes will be exhibited for the first time. Highlights will include Landscape with Three Gabled Cottages Beside a Road, St Jerome beside a Pollard Willow and The Three Crosses, one of his most experimental works.

Bruce Davidson | The American Photographer Nederlands Fotomuseum, Rotterdam 16 September 2017 - 7 January 2018 This autumn, the Nederlands Fotomuseum will be presenting the very first retrospective exhibition of the works of legendary Magnum photographer Bruce Davidson (1933). The exhibition will include more than 200 of his photographs, including work from the famous series Brooklyn Gang, East 100th Street and Time of Change: Civil Rights Movement.

Cabin Crew: Fashion in the Air Kunsthal, Rotterdam 23 September 2017 - 4 February 2018 The extraordinary selection of uniforms in this exhibition is part of the Dutch purser Cliff

Muskiet’s collection. From 1993 onwards he managed to acquire over 1,400 uniforms from 523 different airline companies. The exhibition Cabin Crew is part of the Kunsthal’s mission to disclose hidden private collections.

DROOG: Discover the origin of Dutch Design Centraal Museum, Utrecht 23 September – 3 December 2017 Droog Design is a Dutch design collective established in 1994. Droog have become an internationally renowned collective and have driven a huge awareness in Dutch Design. The Centraal Museum boasts Holland’s largest collection of Droog Design and has collected objects by Droog on an annual basis. The exhibition will present selected works from the collection. Romanticism in the North - from Friedrich to Turner Groninger Museum, Groningen 09 December 2017 to 06 May 2018 Romanticism in the North is the first international survey exhibition of northern European landscape painting. The show will feature works from Holland, Germany, Scandinavia and the United Kingdom, by artists ranging from J.M.W. Turner to Caspar David Friedrich. The paintings address subjects as diverse as travel, the power of nature, and spirituality.

The Dutch in Paris 1789-1914 Van Gogh Museum, Amsterdam 13 October 2017 - 7 January 2018 The exhibition The Dutch in Paris 1789-1914 will present Paris with the work of Dutch artists like George Hendrik Breitner, Kees van Dongen, Piet Mondriaan and, of course, Vincent van Gogh. Not only did artists like PabloPicasso and Claude Monet influence their work, the Dutch made their mark on French art too. For the first time, these works are shown in conjunction with each other. The Dutch in Paris will show how the interaction between artists in Paris came about and sheds light on the impact it had on both Dutch and French art. To find out more, visit: www.holland.com