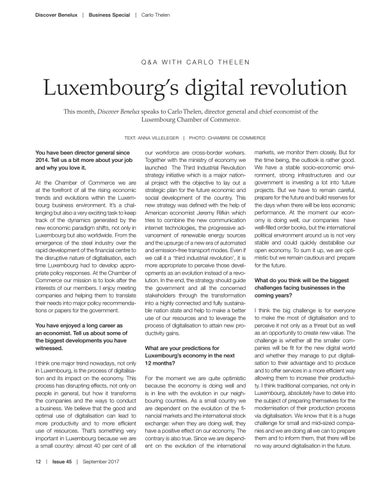 You have been director general since 2014. Tell us a bit more about your job and why you love it. At the Chamber of Commerce we are at the forefront of all the rising economic trends and evolutions within the Luxembourg business environment. It’s a challenging but also a very exciting task to keep track of the dynamics generated by the new economic paradigm shifts, not only in Luxembourg but also worldwide. From the emergence of the steel industry over the rapid development of the financial centre to the disruptive nature of digitalisation, each time Luxembourg had to develop appropriate policy responses. At the Chamber of Commerce our mission is to look after the interests of our members. I enjoy meeting companies and helping them to translate their needs into major policy recommendations or papers for the government. You have enjoyed a long career as an economist. Tell us about some of the biggest developments you have witnessed. I think one major trend nowadays, not only in Luxembourg, is the process of digitalisation and its impact on the economy. This process has disrupting effects, not only on people in general, but how it transforms the companies and the ways to conduct a business. We believe that the good and optimal use of digitalisation can lead to more productivity and to more efficient use of resources. That’s something very important in Luxembourg because we are a small country: almost 40 per cent of all 12  |  Issue 45  |  September 2017

our workforce are cross-border workers. Together with the ministry of economy we launched The Third Industrial Revolution strategy initiative which is a major national project with the objective to lay out a strategic plan for the future economic and social development of the country. This new strategy was defined with the help of American economist Jeremy Rifkin which tries to combine the new communication internet technologies, the progressive advancement of renewable energy sources and the upsurge of a new era of automated and emission-free transport modes. Even if we call it a ‘third industrial revolution’, it is more appropriate to perceive those developments as an evolution instead of a revolution. In the end, the strategy should guide the government and all the concerned stakeholders through the transformation into a highly connected and fully sustainable nation state and help to make a better use of our resources and to leverage the process of digitalisation to attain new productivity gains. What are your predictions for Luxembourg’s economy in the next 12 months? For the moment we are quite optimistic because the economy is doing well and is in line with the evolution in our neighbouring countries. As a small country we are dependent on the evolution of the financial markets and the international stock exchange: when they are doing well, they have a positive effect on our economy. The contrary is also true. Since we are dependent on the evolution of the international

markets, we monitor them closely. But for the time being, the outlook is rather good. We have a stable socio-economic environment, strong infrastructures and our government is investing a lot into future projects. But we have to remain careful, prepare for the future and build reserves for the days when there will be less economic performance. At the moment our economy is doing well, our companies have well-filled order books, but the international political environment around us is not very stable and could quickly destabilise our open economy. To sum it up, we are optimistic but we remain cautious and prepare for the future. What do you think will be the biggest challenges facing businesses in the coming years? I think the big challenge is for everyone to make the most of digitalisation and to perceive it not only as a threat but as well as an opportunity to create new value. The challenge is whether all the smaller companies will be fit for the new digital world and whether they manage to put digitalisation to their advantage and to produce and to offer services in a more efficient way allowing them to increase their productivity. I think traditional companies, not only in Luxembourg, absolutely have to delve into the subject of preparing themselves for the modernisation of their production process via digitalisation. We know that it is a huge challenge for small and mid-sized companies and we are doing all we can to prepare them and to inform them, that there will be no way around digitalisation in the future.