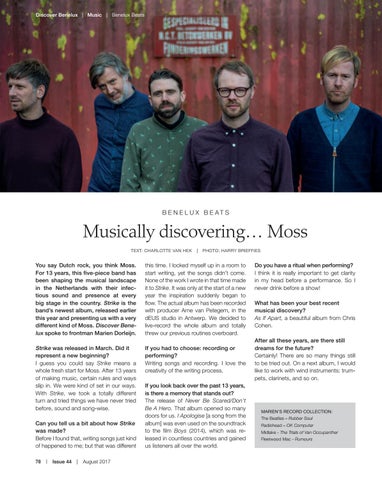 You say Dutch rock, you think Moss. For 13 years, this five-piece band has been shaping the musical landscape in the Netherlands with their infectious sound and presence at every big stage in the country. Strike is the band’s newest album, released earlier this year and presenting us with a very different kind of Moss. Discover Benelux spoke to frontman Marien Dorleijn.

this time. I locked myself up in a room to start writing, yet the songs didn’t come. None of the work I wrote in that time made it to Strike. It was only at the start of a new year the inspiration suddenly began to flow. The actual album has been recorded with producer Arne van Petegem, in the dEUS studio in Antwerp. We decided to live-record the whole album and totally threw our previous routines overboard.

Strike was released in March. Did it represent a new beginning? I guess you could say Strike means a whole fresh start for Moss. After 13 years of making music, certain rules and ways slip in. We were kind of set in our ways. With Strike, we took a totally different turn and tried things we have never tried before, sound and song-wise.

If you had to choose: recording or performing? Writing songs and recording. I love the creativity of the writing process.

Can you tell us a bit about how Strike was made? Before I found that, writing songs just kind of happened to me; but that was different 78  |  Issue 44  |  August 2017

If you look back over the past 13 years, is there a memory that stands out? The release of Never Be Scared/Don’t Be A Hero. That album opened so many doors for us. I Apologise [a song from the album] was even used on the soundtrack to the film Boys (2014), which was released in countless countries and gained us listeners all over the world.

Do you have a ritual when performing? I think it is really important to get clarity in my head before a performance. So I never drink before a show! What has been your best recent musical discovery? As If Apart, a beautiful album from Chris Cohen. After all these years, are there still dreams for the future? Certainly! There are so many things still to be tried out. On a next album, I would like to work with wind instruments: trumpets, clarinets, and so on.