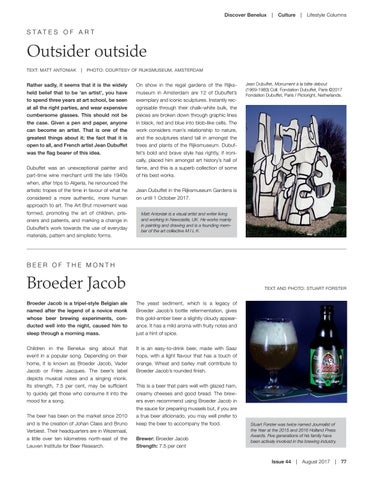 Rather sadly, it seems that it is the widely held belief that to be ‘an artist’, you have to spend three years at art school, be seen at all the right parties, and wear expensive cumbersome glasses. This should not be the case. Given a pen and paper, anyone can become an artist. That is one of the greatest things about it; the fact that it is open to all, and French artist Jean Dubuffet was the flag bearer of this idea. Dubuffet was an unexceptional painter and part-time wine merchant until the late 1940s when, after trips to Algeria, he renounced the artistic tropes of the time in favour of what he considered a more authentic, more human approach to art. The Art Brut movement was formed, promoting the art of children, prisoners and patients, and marking a change in Dubuffet’s work towards the use of everyday materials, pattern and simplistic forms.

On show in the regal gardens of the Rijksmuseum in Amsterdam are 12 of Dubuffet’s exemplary and iconic sculptures. Instantly recognisable through their chalk-white bulk, the pieces are broken down through graphic lines in black, red and blue into blob-like cells. The work considers man’s relationship to nature, and the sculptures stand tall in amongst the trees and plants of the Rijksmuseum. Dubuffet’s bold and brave style has rightly, if ironically, placed him amongst art history’s hall of fame, and this is a superb collection of some of his best works.

Jean Dubuffet in the Rijksmuseum Gardens is on until 1 October 2017. Matt Antoniak is a visual artist and writer living and working in Newcastle, UK. He works mainly in painting and drawing and is a founding member of the art collective M I L K.

Broeder Jacob is a tripel-style Belgian ale named after the legend of a novice monk whose beer brewing experiments, conducted well into the night, caused him to sleep through a morning mass.

The yeast sediment, which is a legacy of Broeder Jacob’s bottle refermentation, gives this gold-amber beer a slightly cloudy appearance. It has a mild aroma with fruity notes and just a hint of spice.

Children in the Benelux sing about that event in a popular song. Depending on their home, it is known as Broeder Jacob, Vader Jacob or Frère Jacques. The beer’s label depicts musical notes and a singing monk. Its strength, 7.5 per cent, may be sufficient to quickly get those who consume it into the mood for a song.

It is an easy-to-drink beer, made with Saaz hops, with a light flavour that has a touch of orange. Wheat and barley malt contribute to Broeder Jacob’s rounded finish.

The beer has been on the market since 2010 and is the creation of Johan Claes and Bruno Verbiest. Their headquarters are in Wezemaal, a little over ten kilometres north-east of the Leuven Institute for Beer Research.

This is a beer that pairs well with glazed ham, creamy cheeses and good bread. The brewers even recommend using Broeder Jacob in the sauce for preparing mussels but, if you are a true beer aficionado, you may well prefer to keep the beer to accompany the food. Brewer: Broeder Jacob Strength: 7.5 per cent