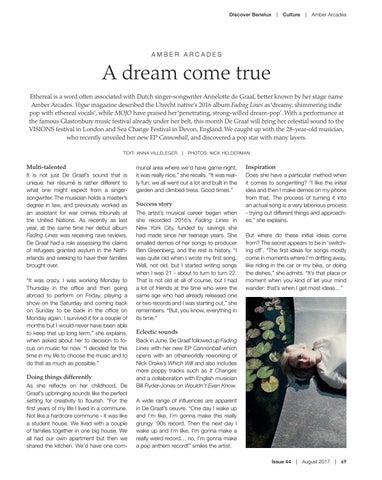 A dream come true Ethereal is a word often associated with Dutch singer-songwriter Annelotte de Graaf, better known by her stage name Amber Arcades. Vogue magazine described the Utrecht native’s 2016 album Fading Lines as ‘dreamy, shimmering indie pop with ethereal vocals’, while MOJO have praised her ‘penetrating, strong-willed dream-pop’. With a performance at the famous Glastonbury music festival already under her belt, this month De Graaf will bring her celestial sound to the VISIONS festival in London and Sea Change Festival in Devon, England. We caught up with the 28-year-old musician, who recently unveiled her new EP Cannonball, and discovered a pop star with many layers. TEXT: ANNA VILLELEGER  |  PHOTOS: NICK HELDERMAN

Multi-talented It is not just De Graaf’s sound that is unique: her résumé is rather different to what one might expect from a singersongwriter. The musician holds a master’s degree in law, and previously worked as an assistant for war crimes tribunals at the United Nations. As recently as last year, at the same time her debut album Fading Lines was receiving rave reviews, De Graaf had a role assessing the claims of refugees granted asylum in the Netherlands and seeking to have their families brought over. “It was crazy. I was working Monday to Thursday in the office and then going abroad to perform on Friday, playing a show on the Saturday and coming back on Sunday to be back in the office on Monday again. I survived it for a couple of months but I would never have been able to keep that up long term,” she explains, when asked about her to decision to focus on music for now. “I decided for this time in my life to choose the music and to do that as much as possible.”

Doing things differently As she reflects on her childhood, De Graaf’s upbringing sounds like the perfect setting for creativity to flourish. “For the first years of my life I lived in a commune. Not like a hardcore commune - it was like a student house. We lived with a couple of families together in one big house. We all had our own apartment but then we shared the kitchen. We’d have one com-

munal area where we’d have game night, it was really nice,” she recalls. “It was really fun; we all went out a lot and built in the garden and climbed tress. Good times.”

Success story The artist’s musical career began when she recorded 2016’s Fading Lines in New York City, funded by savings she had made since her teenage years. She emailed demos of her songs to producer Ben Greenberg, and the rest is history. “I was quite old when I wrote my first song. Well, not old, but I started writing songs when I was 21 - about to turn to turn 22. That is not old at all of course, but I had a lot of friends at the time who were the same age who had already released one or two records and I was starting out,” she remembers. “But, you know, everything in its time.”

Inspiration Does she have a particular method when it comes to songwriting? “I like the initial idea and then I make demos on my phone from that. The process of turning it into an actual song is a very laborious process - trying out different things and approaches,” she explains. But where do these initial ideas come from? The secret appears to be in ‘switching off’. “The first ideas for songs mostly come in moments where I’m drifting away, like riding in the car or my bike, or doing the dishes,” she admits. “It’s that place or moment when you kind of let your mind wander: that’s when I get most ideas…”