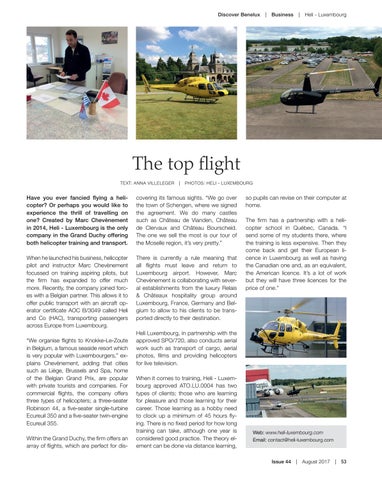 Have you ever fancied flying a helicopter? Or perhaps you would like to experience the thrill of travelling on one? Created by Marc Chevènement in 2014, Heli - Luxembourg is the only company in the Grand Duchy offering both helicopter training and transport.

covering its famous sights. “We go over the town of Schengen, where we signed the agreement. We do many castles such as Château de Vianden, Château de Clervaux and Château Bourscheid. The one we sell the most is our tour of the Moselle region, it’s very pretty.”

When he launched his business, helicopter pilot and instructor Marc Chevènement focussed on training aspiring pilots, but the firm has expanded to offer much more. Recently, the company joined forces with a Belgian partner. This allows it to offer public transport with an aircraft operator certificate AOC B/3049 called Heli and Co (HAC), transporting passengers across Europe from Luxembourg.

There is currently a rule meaning that all flights must leave and return to Luxembourg airport. However, Marc Chevènement is collaborating with several establishments from the luxury Relais & Châteaux hospitality group around Luxembourg, France, Germany and Belgium to allow to his clients to be transported directly to their destination.

“We organise flights to Knokke-Le-Zoute in Belgium, a famous seaside resort which is very popular with Luxembourgers,” explains Chevènement, adding that cities such as Liège, Brussels and Spa, home of the Belgian Grand Prix, are popular with private tourists and companies. For commercial flights, the company offers three types of helicopters; a three-seater Robinson 44, a five-seater single-turbine Ecureuil 350 and a five-seater twin-engine Ecureuil 355. Within the Grand Duchy, the firm offers an array of flights, which are perfect for dis-

so pupils can revise on their computer at home. The firm has a partnership with a helicopter school in Québec, Canada. “I send some of my students there, where the training is less expensive. Then they come back and get their European licence in Luxembourg as well as having the Canadian one and, as an equivalent, the American licence. It’s a lot of work but they will have three licences for the price of one.”

Heli Luxembourg, in partnership with the approved SPO/720, also conducts aerial work such as transport of cargo, aerial photos, films and providing helicopters for live television. When it comes to training, Heli - Luxembourg approved ATO.LU.0004 has two types of clients; those who are learning for pleasure and those learning for their career. Those learning as a hobby need to clock up a minimum of 45 hours flying. There is no fixed period for how long training can take, although one year is considered good practice. The theory element can be done via distance learning,