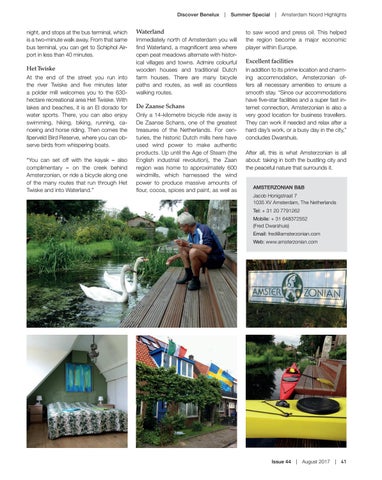 night, and stops at the bus terminal, which is a two-minute walk away. From that same bus terminal, you can get to Schiphol Airport in less than 40 minutes.

Het Twiske At the end of the street you run into the river Twiske and five minutes later a polder mill welcomes you to the 630hectare recreational area Het Twiske. With lakes and beaches, it is an El dorado for water sports. There, you can also enjoy swimming, hiking, biking, running, canoeing and horse riding. Then comes the Ilperveld Bird Reserve, where you can observe birds from whispering boats. “You can set off with the kayak – also complimentary – on the creek behind Amsterzonian, or ride a bicycle along one of the many routes that run through Het Twiske and into Waterland.”

Waterland Immediately north of Amsterdam you will find Waterland, a magnificent area where open peat meadows alternate with historical villages and towns. Admire colourful wooden houses and traditional Dutch farm houses. There are many bicycle paths and routes, as well as countless walking routes.

De Zaanse Schans Only a 14-kilometre bicycle ride away is De Zaanse Schans, one of the greatest treasures of the Netherlands. For centuries, the historic Dutch mills here have used wind power to make authentic products. Up until the Age of Steam (the English industrial revolution), the Zaan region was home to approximately 600 windmills, which harnessed the wind power to produce massive amounts of flour, cocoa, spices and paint, as well as

to saw wood and press oil. This helped the region become a major economic player within Europe.

Excellent facilities In addition to its prime location and charming accommodation, Amsterzonian offers all necessary amenities to ensure a smooth stay. “Since our accommodations have five-star facilities and a super fast internet connection, Amsterzonian is also a very good location for business travellers. They can work if needed and relax after a hard day’s work, or a busy day in the city,” concludes Dwarshuis. After all, this is what Amsterzonian is all about: taking in both the bustling city and the peaceful nature that surrounds it. AMSTERZONIAN B&B Jacob Honigstraat 7 1035 XV Amsterdam, The Netherlands Tel: + 31 20 7791262 Mobile: + 31 648372552 (Fred Dwarshuis) Email: fred@amsterzonian.com Web: www.amsterzonian.com