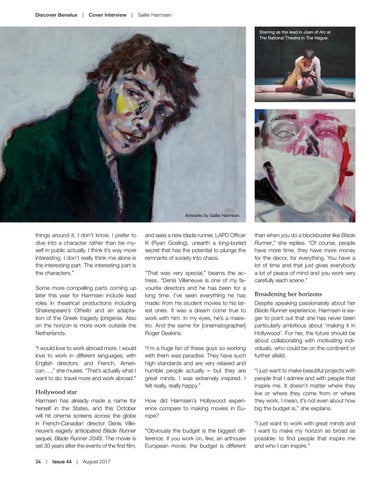 Discover Benelux  |  Cover Interview  |  Sallie Harmsen Starring as the lead in Joan of Arc at The National Theatre in The Hague.

things around it, I don’t know, I prefer to dive into a character rather than be myself in public actually. I think it’s way more interesting. I don’t really think me alone is the interesting part. The interesting part is the characters.” Some more compelling parts coming up later this year for Harmsen include lead roles in theatrical productions including Shakespeare’s Othello and an adaptation of the Greek tragedy Iphigenia. Also on the horizon is more work outside the Netherlands. “I would love to work abroad more. I would love to work in different languages; with English directors, and French, American….,” she muses. “That’s actually what I want to do: travel more and work abroad.”

Hollywood star Harmsen has already made a name for herself in the States, and this October will hit cinema screens across the globe in French-Canadian director Denis Villeneuve’s eagerly anticipated Blade Runner sequel, Blade Runner 2049. The movie is set 30 years after the events of the first film, 34  |  Issue 44  |  August 2017

and sees a new blade runner, LAPD Officer K (Ryan Gosling), unearth a long-buried secret that has the potential to plunge the remnants of society into chaos. “That was very special,” beams the actress. “Denis Villeneuve is one of my favourite directors and he has been for a long time. I’ve seen everything he has made: from his student movies to his latest ones. It was a dream come true to work with him. In my eyes, he’s a maestro. And the same for [cinematographer] Roger Deakins. “I’m a huge fan of these guys so working with them was paradise. They have such high standards and are very relaxed and humble people actually – but they are great minds. I was extremely inspired. I felt really, really happy.” How did Harmsen’s Hollywood experience compare to making movies in Europe? “Obviously the budget is the biggest difference. If you work on, like, an arthouse European movie, the budget is different

than when you do a blockbuster like Blade Runner,” she replies. “Of course, people have more time, they have more money for the decor, for everything. You have a lot of time and that just gives everybody a lot of peace of mind and you work very carefully each scene.”

Broadening her horizons Despite speaking passionately about her Blade Runner experience, Harmsen is eager to point out that she has never been particularly ambitious about ‘making it in Hollywood’. For her, the future should be about collaborating with motivating individuals, who could be on the continent or further afield. “I just want to make beautiful projects with people that I admire and with people that inspire me. It doesn’t matter where they live or where they come from or where they work. I mean, it’s not even about how big the budget is,” she explains. “I just want to work with great minds and I want to make my horizon as broad as possible: to find people that inspire me and who I can inspire.”