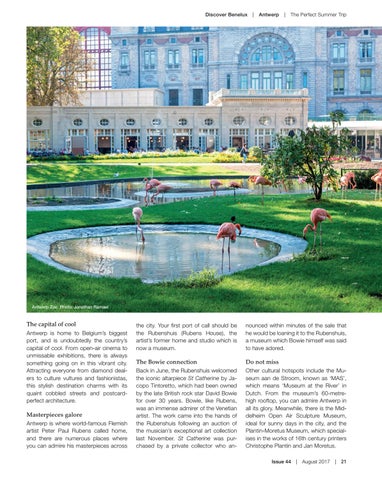 The capital of cool Antwerp is home to Belgium’s biggest port, and is undoubtedly the country’s capital of cool. From open-air cinema to unmissable exhibitions, there is always something going on in this vibrant city. Attracting everyone from diamond dealers to culture vultures and fashionistas, this stylish destination charms with its quaint cobbled streets and postcardperfect architecture.

Masterpieces galore Antwerp is where world-famous Flemish artist Peter Paul Rubens called home, and there are numerous places where you can admire his masterpieces across

the city. Your first port of call should be the Rubenshuis (Rubens House), the artist’s former home and studio which is now a museum.

nounced within minutes of the sale that he would be loaning it to the Rubenshuis, a museum which Bowie himself was said to have adored.

Back in June, the Rubenshuis welcomed the iconic altarpiece St Catherine by Jacopo Tintoretto, which had been owned by the late British rock star David Bowie for over 30 years. Bowie, like Rubens, was an immense admirer of the Venetian artist. The work came into the hands of the Rubenshuis following an auction of the musician’s exceptional art collection last November. St Catherine was purchased by a private collector who an-

Other cultural hotspots include the Museum aan de Stroom, known as ‘MAS’, which means ‘Museum at the River’ in Dutch. From the museum’s 60-metrehigh rooftop, you can admire Antwerp in all its glory. Meanwhile, there is the Middelheim Open Air Sculpture Museum, ideal for sunny days in the city, and the Plantin-Moretus Museum, which specialises in the works of 16th century printers Christophe Plantin and Jan Moretus. Issue 44  |  August 2017  |  21