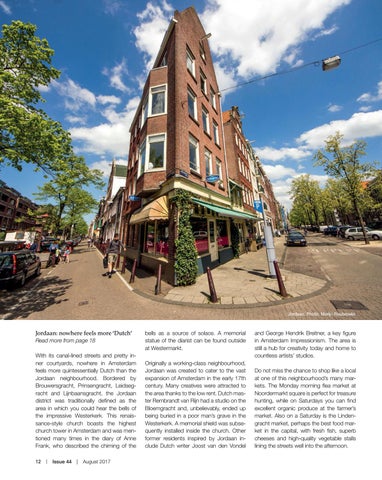 Jordaan: nowhere feels more ‘Dutch’ Read more from page 18 With its canal-lined streets and pretty inner courtyards, nowhere in Amsterdam feels more quintessentially Dutch than the Jordaan neighbourhood. Bordered by Brouwersgracht, Prinsengracht, Leidsegracht and Lijnbaansgracht, the Jordaan district was traditionally defined as the area in which you could hear the bells of the impressive Westerkerk. This renaissance-style church boasts the highest church tower in Amsterdam and was mentioned many times in the diary of Anne Frank, who described the chiming of the 12  |  Issue 44  |  August 2017

bells as a source of solace. A memorial statue of the diarist can be found outside at Westermarkt. Originally a working-class neighbourhood, Jordaan was created to cater to the vast expansion of Amsterdam in the early 17th century. Many creatives were attracted to the area thanks to the low rent. Dutch master Rembrandt van Rijn had a studio on the Bloemgracht and, unbelievably, ended up being buried in a poor man’s grave in the Westerkerk. A memorial shield was subsequently installed inside the church. Other former residents inspired by Jordaan include Dutch writer Joost van den Vondel

and George Hendrik Breitner, a key figure in Amsterdam Impressionism. The area is still a hub for creativity today and home to countless artists’ studios. Do not miss the chance to shop like a local at one of this neighbourhood’s many markets. The Monday morning flea market at Noordermarkt square is perfect for treasure hunting, while on Saturdays you can find excellent organic produce at the farmer’s market. Also on a Saturday is the Lindengracht market, perhaps the best food market in the capital, with fresh fish, superb cheeses and high-quality vegetable stalls lining the streets well into the afternoon.