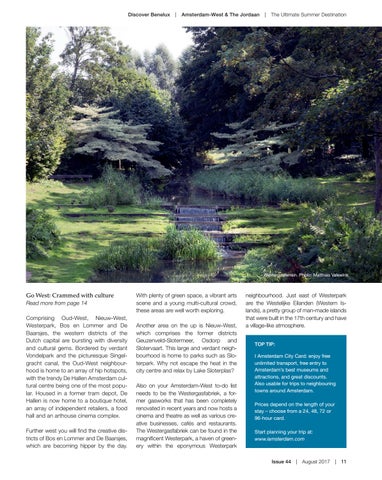 Go West: Crammed with culture Read more from page 14 Comprising Oud-West, Nieuw-West, Westerpark, Bos en Lommer and De Baarsjes, the western districts of the Dutch capital are bursting with diversity and cultural gems. Bordered by verdant Vondelpark and the picturesque Singelgracht canal, the Oud-West neighbourhood is home to an array of hip hotspots, with the trendy De Hallen Amsterdam cultural centre being one of the most popular. Housed in a former tram depot, De Hallen is now home to a boutique hotel, an array of independent retailers, a food hall and an arthouse cinema complex. Further west you will find the creative districts of Bos en Lommer and De Baarsjes, which are becoming hipper by the day.

With plenty of green space, a vibrant arts scene and a young multi-cultural crowd, these areas are well worth exploring. Another area on the up is Nieuw-West, which comprises the former districts Geuzenveld-Slotermeer, Osdorp and Slotervaart. This large and verdant neighbourhood is home to parks such as Sloterpark. Why not escape the heat in the city centre and relax by Lake Sloterplas? Also on your Amsterdam-West to-do list needs to be the Westergasfabriek, a former gasworks that has been completely renovated in recent years and now hosts a cinema and theatre as well as various creative businesses, cafés and restaurants. The Westergasfabriek can be found in the magnificent Westerpark, a haven of greenery within the eponymous Westerpark

neighbourhood. Just east of Westerpark are the Westelijke Eilanden (Western Islands), a pretty group of man-made islands that were built in the 17th century and have a village-like atmosphere. TOP TIP: I Amsterdam City Card: enjoy free unlimited transport, free entry to Amsterdam’s best museums and attractions, and great discounts. Also usable for trips to neighbouring towns around Amsterdam. Prices depend on the length of your stay – choose from a 24, 48, 72 or 96-hour card. Start planning your trip at: www.iamsterdam.com