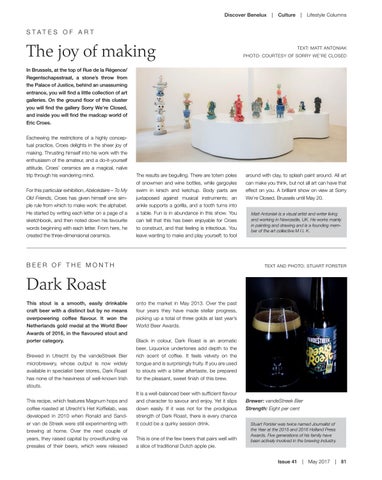 The joy of making

In Brussels, at the top of Rue de la Régence/ Regentschapsstraat, a stone’s throw from the Palace of Justice, behind an unassuming entrance, you will find a little collection of art galleries. On the ground floor of this cluster you will find the gallery Sorry We’re Closed, and inside you will find the madcap world of Eric Croes. Eschewing the restrictions of a highly conceptual practice, Croes delights in the sheer joy of making. Thrusting himself into his work with the enthusiasm of the amateur, and a do-it-yourself attitude, Croes’ ceramics are a magical, naïve trip through his wandering mind. For this particular exhibition, Abécédaire – To My Old Friends, Croes has given himself one simple rule from which to make work: the alphabet. He started by writing each letter on a page of a sketchbook, and then noted down his favourite words beginning with each letter. From here, he created the three-dimensional ceramics.

The results are beguiling. There are totem poles of snowmen and wine bottles, while gargoyles swim in kirsch and ketchup. Body parts are juxtaposed against musical instruments; an ankle supports a gorilla, and a tooth turns into a table. Fun is in abundance in this show. You can tell that this has been enjoyable for Croes to construct, and that feeling is infectious. You leave wanting to make and play yourself; to fool

around with clay, to splash paint around. All art can make you think, but not all art can have that effect on you. A brilliant show on view at Sorry We’re Closed, Brussels until May 20. Matt Antoniak is a visual artist and writer living and working in Newcastle, UK. He works mainly in painting and drawing and is a founding member of the art collective M I L K.

Dark Roast This stout is a smooth, easily drinkable craft beer with a distinct but by no means overpowering coffee flavour. It won the Netherlands gold medal at the World Beer Awards of 2016, in the flavoured stout and porter category. Brewed in Utrecht by the vandeStreek Bier microbrewery, whose output is now widely available in specialist beer stores, Dark Roast has none of the heaviness of well-known Irish stouts. This recipe, which features Magnum hops and coffee roasted at Utrecht’s Het Koffielab, was developed in 2010 when Ronald and Sander van de Streek were still experimenting with brewing at home. Over the next couple of years, they raised capital by crowdfunding via presales of their beers, which were released

onto the market in May 2013. Over the past four years they have made stellar progress, picking up a total of three golds at last year’s World Beer Awards. Black in colour, Dark Roast is an aromatic beer. Liquorice undertones add depth to the rich scent of coffee. It feels velvety on the tongue and is surprisingly fruity. If you are used to stouts with a bitter aftertaste, be prepared for the pleasant, sweet finish of this brew. It is a well-balanced beer with sufficient flavour and character to savour and enjoy. Yet it slips down easily. If it was not for the prodigious strength of Dark Roast, there is every chance it could be a quirky session drink. This is one of the few beers that pairs well with a slice of traditional Dutch apple pie.

Brewer: vandeStreek Bier Strength: Eight per cent Stuart Forster was twice named Journalist of the Year at the 2015 and 2016 Holland Press Awards. Five generations of his family have been actively involved in the brewing industry.