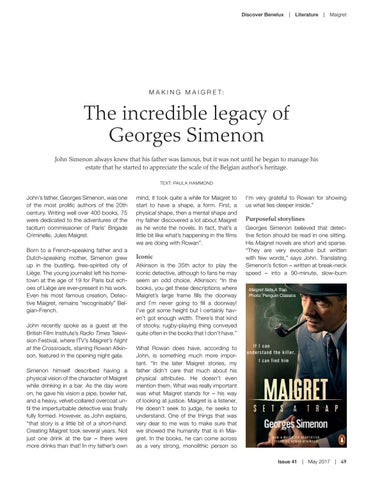 The incredible legacy of Georges Simenon John Simenon always knew that his father was famous, but it was not until he began to manage his estate that he started to appreciate the scale of the Belgian author’s heritage. TEXT: PAULA HAMMOND

John’s father, Georges Simenon, was one of the most prolific authors of the 20th century. Writing well over 400 books, 75 were dedicated to the adventures of the taciturn commissioner of Paris’ Brigade Criminelle, Jules Maigret. Born to a French-speaking father and a Dutch-speaking mother, Simenon grew up in the bustling, free-spirited city of Liège. The young journalist left his hometown at the age of 19 for Paris but echoes of Liège are ever-present in his work. Even his most famous creation, Detective Maigret, remains “recognisably” Belgian-French. John recently spoke as a guest at the British Film Institute’s Radio Times Television Festival, where ITV’s Maigret’s Night at the Crossroads, starring Rowan Atkinson, featured in the opening night gala. Simenon himself described having a physical vision of the character of Maigret while drinking in a bar. As the day wore on, he gave his vision a pipe, bowler hat, and a heavy, velvet-collared overcoat until the imperturbable detective was finally fully formed. However, as John explains, “that story is a little bit of a short-hand. Creating Maigret took several years. Not just one drink at the bar – there were more drinks than that! In my father’s own

mind, it took quite a while for Maigret to start to have a shape, a form. First, a physical shape, then a mental shape and my father discovered a lot about Maigret as he wrote the novels. In fact, that’s a little bit like what’s happening in the films we are doing with Rowan”.

Iconic Atkinson is the 35th actor to play the iconic detective, although to fans he may seem an odd choice. Atkinson: “In the books, you get these descriptions where Maigret’s large frame fills the doorway and I’m never going to fill a doorway! I’ve got some height but I certainly haven’t got enough width. There’s that kind of stocky, rugby-playing thing conveyed quite often in the books that I don’t have.”

I’m very grateful to Rowan for showing us what lies deeper inside.”

Purposeful storylines Georges Simenon believed that detective fiction should be read in one sitting. His Maigret novels are short and sparse. “They are very evocative but written with few words,” says John. Translating Simenon’s fiction – written at break-neck speed – into a 90-minute, slow-burn Maigret Sets A Trap. Photo: Penguin Classics

What Rowan does have, according to John, is something much more important. “In the later Maigret stories, my father didn’t care that much about his physical attributes. He doesn’t even mention them. What was really important was what Maigret stands for – his way of looking at justice. Maigret is a listener. He doesn’t seek to judge, he seeks to understand. One of the things that was very dear to me was to make sure that we showed the humanity that is in Maigret. In the books, he can come across as a very strong, monolithic person so Issue 41  |  May 2017  |  49