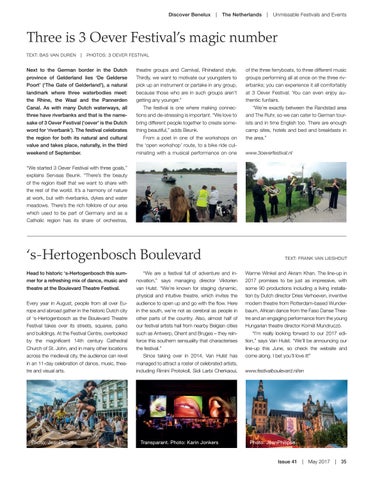 Next to the German border in the Dutch province of Gelderland lies ‘De Gelderse Poort’ (‘The Gate of Gelderland’), a natural landmark where three waterbodies meet: the Rhine, the Waal and the Pannerden Canal. As with many Dutch waterways, all three have riverbanks and that is the namesake of 3 Oever Festival (‘oever’ is the Dutch word for ‘riverbank’). The festival celebrates the region for both its natural and cultural value and takes place, naturally, in the third weekend of September.

theatre groups and Carnival, Rhineland style. Thirdly, we want to motivate our youngsters to pick up an instrument or partake in any group, because those who are in such groups aren’t getting any younger.” The festival is one where making connections and de-stressing is important. “We love to bring different people together to create something beautiful,” adds Beunk. From a poet in one of the workshops on the ‘open workshop’ route, to a bike ride culminating with a musical performance on one

of the three ferryboats, to three different music groups performing all at once on the three riverbanks; you can experience it all comfortably at 3 Oever Festival. You can even enjoy authentic funfairs. “We’re exactly between the Randstad area and The Ruhr, so we can cater to German tourists and in time English too. There are enough camp sites, hotels and bed and breakfasts in the area.” www.3oeverfestival.nl

“We started 3 Oever Festival with three goals,” explains Servaas Beunk. “There’s the beauty of the region itself that we want to share with the rest of the world. It’s a harmony of nature at work, but with riverbanks, dykes and water meadows. There’s the rich folklore of our area which used to be part of Germany and as a Catholic region has its share of orchestras,

‘s-Hertogenbosch Boulevard Head to historic ‘s-Hertogenbosch this summer for a refreshing mix of dance, music and theatre at the Boulevard Theatre Festival. Every year in August, people from all over Europe and abroad gather in the historic Dutch city of ‘s-Hertogenbosch as the Boulevard Theatre Festival takes over its streets, squares, parks and buildings. At the Festival Centre, overlooked by the magnificent 14th century Cathedral Church of St. John, and in many other locations across the medieval city, the audience can revel in an 11-day celebration of dance, music, theatre and visual arts.

“We are a festival full of adventure and innovation,” says managing director Viktorien van Hulst. “We’re known for staging dynamic, physical and intuitive theatre, which invites the audience to open up and go with the flow. Here in the south, we’re not as cerebral as people in other parts of the country. Also, almost half of our festival artists hail from nearby Belgian cities such as Antwerp, Ghent and Bruges – they reinforce this southern sensuality that characterises the festival.” Since taking over in 2014, Van Hulst has managed to attract a roster of celebrated artists, including Rimini Protokoll, Sidi Larbi Cherkaoui,

Warme Winkel and Akram Khan. The line-up in 2017 promises to be just as impressive, with some 90 productions including a living installation by Dutch director Dries Verhoeven, inventive modern theatre from Rotterdam-based Wunderbaum, African dance from the Faso Danse Theatre and an engaging performance from the young Hungarian theatre director Kornél Mundruczó. “I’m really looking forward to our 2017 edition,” says Van Hulst. “We’ll be announcing our line-up this June, so check the website and come along. I bet you’ll love it!” www.festivalboulevard.nl/en