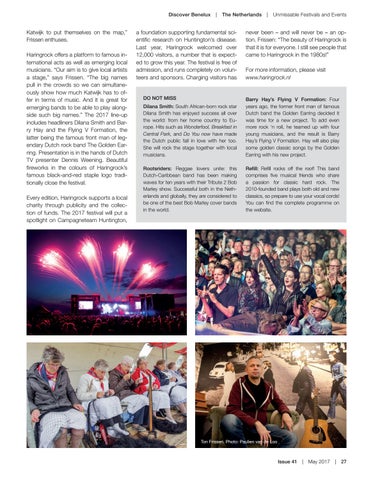 Katwijk to put themselves on the map,” Frissen enthuses. Haringrock offers a platform to famous international acts as well as emerging local musicians. “Our aim is to give local artists a stage,” says Frissen. “The big names pull in the crowds so we can simultaneously show how much Katwijk has to offer in terms of music. And it is great for emerging bands to be able to play alongside such big names.” The 2017 line-up includes headliners Dilana Smith and Barry Hay and the Flying V Formation, the latter being the famous front man of legendary Dutch rock band The Golden Earring. Presentation is in the hands of Dutch TV presenter Dennis Weening. Beautiful fireworks in the colours of Haringrock’s famous black-and-red staple logo traditionally close the festival. Every edition, Haringrock supports a local charity through publicity and the collection of funds. The 2017 festival will put a spotlight on Campagneteam Huntington,

a foundation supporting fundamental scientific research on Huntington’s disease. Last year, Haringrock welcomed over 12,000 visitors, a number that is expected to grow this year. The festival is free of admission, and runs completely on volunteers and sponsors. Charging visitors has

never been – and will never be – an option. Frissen: “The beauty of Haringrock is that it is for everyone. I still see people that came to Haringrock in the 1980s!” For more information, please visit www.haringrock.nl

Dilana Smith: South African-born rock star Dilana Smith has enjoyed success all over the world: from her home country to Europe. Hits such as Wonderfool, Breakfast in Central Park, and Do You now have made the Dutch public fall in love with her too. She will rock the stage together with local musicians.

Barry Hay’s Flying V Formation: Four years ago, the former front man of famous Dutch band the Golden Earring decided it was time for a new project. To add even more rock ‘n roll, he teamed up with four young musicians, and the result is Barry Hay’s Flying V Formation. Hay will also play some golden classic songs by the Golden Earring with his new project.

Rootsriders: Reggae lovers unite: this Dutch-Caribbean band has been making waves for ten years with their Tribute 2 Bob Marley show. Successful both in the Netherlands and globally, they are considered to be one of the best Bob Marley cover bands in the world.

Refill: Refill rocks off the roof! This band comprises five musical friends who share a passion for classic hard rock. The 2010-founded band plays both old and new classics, so prepare to use your vocal cords! You can find the complete programme on the website.