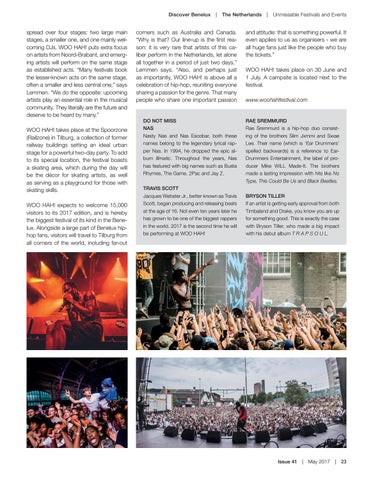 spread over four stages: two large main stages, a smaller one, and one mainly welcoming DJs. WOO HAH! puts extra focus on artists from Noord-Brabant, and emerging artists will perform on the same stage as established acts. “Many festivals book the lesser-known acts on the same stage, often a smaller and less central one,” says Lemmen. “We do the opposite: upcoming artists play an essential role in the musical community. They literally are the future and deserve to be heard by many.” WOO HAH! takes place at the Spoorzone (Railzone) in Tilburg, a collection of former railway buildings setting an ideal urban stage for a powerful two-day party. To add to its special location, the festival boasts a skating area, which during the day will be the décor for skating artists, as well as serving as a playground for those with skating skills. WOO HAH! expects to welcome 15,000 visitors to its 2017 edition, and is hereby the biggest festival of its kind in the Benelux. Alongside a large part of Benelux hiphop fans, visitors will travel to Tilburg from all corners of the world, including far-out

corners such as Australia and Canada. “Why is that? Our line-up is the first reason: it is very rare that artists of this caliber perform in the Netherlands, let alone all together in a period of just two days,” Lemmen says. “Also, and perhaps just as importantly, WOO HAH! is above all a celebration of hip-hop, reuniting everyone sharing a passion for the genre. That many people who share one important passion

DO NOT MISS NAS Nasty Nas and Nas Escobar, both these names belong to the legendary lyrical rapper Nas. In 1994, he dropped the epic album Illmatic. Throughout the years, Nas has featured with big names such as Busta Rhymes, The Game, 2Pac and Jay Z. TRAVIS SCOTT Jacques Webster Jr., better known as Travis Scott, began producing and releasing beats at the age of 16. Not even ten years later he has grown to be one of the biggest rappers in the world. 2017 is the second time he will be performing at WOO HAH!

and attitude: that is something powerful. It even applies to us as organisers - we are all huge fans just like the people who buy the tickets.” WOO HAH! takes place on 30 June and 1 July. A campsite is located next to the festival. www.woohahfestival.com

RAE SREMMURD Rae Sremmurd is a hip-hop duo consisting of the brothers Slim Jxmmi and Swae Lee. Their name (which is ‘Ear Drummers’ spelled backwards) is a reference to EarDrummers Entertainment, the label of producer Mike WiLL Made-It. The brothers made a lasting impression with hits like No Type, This Could Be Us and Black Beatles. BRYSON TILLER If an artist is getting early approval from both Timbaland and Drake, you know you are up for something good. This is exactly the case with Bryson Tiller, who made a big impact with his debut album T R A P S O U L.