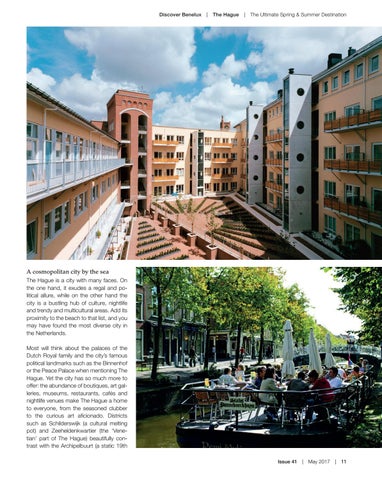 A cosmopolitan city by the sea The Hague is a city with many faces. On the one hand, it exudes a regal and political allure, while on the other hand the city is a bustling hub of culture, nightlife and trendy and multicultural areas. Add its proximity to the beach to that list, and you may have found the most diverse city in the Netherlands. Most will think about the palaces of the Dutch Royal family and the city’s famous political landmarks such as the Binnenhof or the Peace Palace when mentioning The Hague. Yet the city has so much more to offer: the abundance of boutiques, art galleries, museums, restaurants, cafés and nightlife venues make The Hague a home to everyone, from the seasoned clubber to the curious art aficionado. Districts such as Schilderswijk (a cultural melting pot) and Zeeheldenkwartier (the ‘Venetian’ part of The Hague) beautifully contrast with the Archipelbuurt (a static 19th Issue 41  |  May 2017  |  11