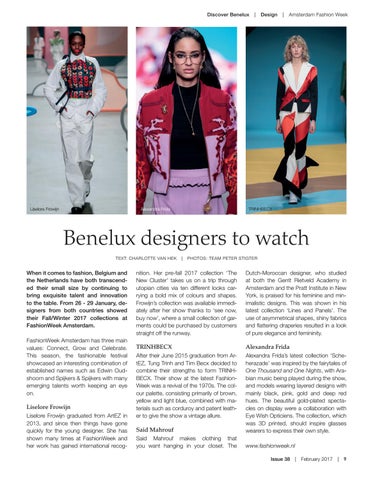 When it comes to fashion, Belgium and the Netherlands have both transcended their small size by continuing to bring exquisite talent and innovation to the table. From 26 - 29 January, designers from both countries showed their Fall/Winter 2017 collections at FashionWeek Amsterdam. FashionWeek Amsterdam has three main values: Connect, Grow and Celebrate. This season, the fashionable festival showcased an interesting combination of established names such as Edwin Oudshoorn and Spijkers & Spijkers with many emerging talents worth keeping an eye on.

Liselore Frowijn Liselore Frowijn graduated from ArtEZ in 2013, and since then things have gone quickly for the young designer. She has shown many times at FashionWeek and her work has gained international recog-

nition. Her pre-fall 2017 collection ‘The New Cluster’ takes us on a trip through utopian cities via ten different looks carrying a bold mix of colours and shapes. Frowijn’s collection was available immediately after her show thanks to ‘see now, buy now’, where a small collection of garments could be purchased by customers straight off the runway.

Dutch-Moroccan designer, who studied at both the Gerrit Rietveld Academy in Amsterdam and the Pratt Institute in New York, is praised for his feminine and minimalistic designs. This was shown in his latest collection ‘Lines and Panels’. The use of asymmetrical shapes, shiny fabrics and flattering draperies resulted in a look of pure elegance and femininity.

After their June 2015 graduation from ArtEZ, Tung Trinh and Tim Becx decided to combine their strengths to form TRINHBECX. Their show at the latest FashionWeek was a revival of the 1970s. The colour palette, consisting primarily of brown, yellow and light blue, combined with materials such as corduroy and patent leather to give the show a vintage allure.

Alexandra Frida’s latest collection ‘Scheherazade’ was inspired by the fairytales of One Thousand and One Nights, with Arabian music being played during the show, and models wearing layered designs with mainly black, pink, gold and deep red hues. The beautiful gold-plated spectacles on display were a collaboration with Eye Wish Opticiens. The collection, which was 3D printed, should inspire glasses wearers to express their own style.

Said Mahrouf makes clothing that you want hanging in your closet. The