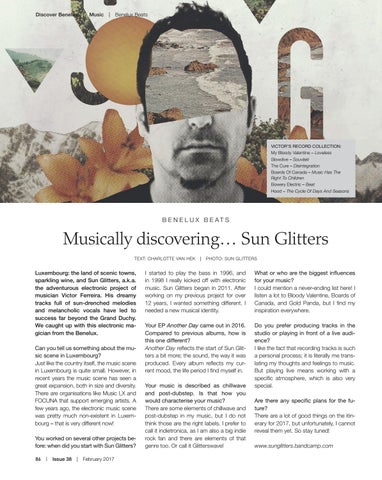 Luxembourg: the land of scenic towns, sparkling wine, and Sun Glitters, a.k.a. the adventurous electronic project of musician Victor Ferreira. His dreamy tracks full of sun-drenched melodies and melancholic vocals have led to success far beyond the Grand Duchy. We caught up with this electronic magician from the Benelux. Can you tell us something about the music scene in Luxembourg? Just like the country itself, the music scene in Luxembourg is quite small. However, in recent years the music scene has seen a great expansion, both in size and diversity. There are organisations like Music LX and FOCUNA that support emerging artists. A few years ago, the electronic music scene was pretty much non-existent in Luxembourg – that is very different now! You worked on several other projects before: when did you start with Sun Glitters? 86  |  Issue 38  |  February 2017

I started to play the bass in 1996, and in 1998 I really kicked off with electronic music. Sun Glitters began in 2011. After working on my previous project for over 12 years, I wanted something different. I needed a new musical identity.

What or who are the biggest influences for your music? I could mention a never-ending list here! I listen a lot to Bloody Valentine, Boards of Canada, and Gold Panda, but I find my inspiration everywhere.

Your EP Another Day came out in 2016. Compared to previous albums, how is this one different? Another Day reflects the start of Sun Glitters a bit more; the sound, the way it was produced. Every album reflects my current mood, the life period I find myself in.

Do you prefer producing tracks in the studio or playing in front of a live audience? I like the fact that recording tracks is such a personal process; it is literally me translating my thoughts and feelings to music. But playing live means working with a specific atmosphere, which is also very special.

Your music is described as chillwave and post-dubstep. Is that how you would characterise your music? There are some elements of chillwave and post-dubstep in my music, but I do not think those are the right labels. I prefer to call it indietronica, as I am also a big indie rock fan and there are elements of that genre too. Or call it Glitterswave!

Are there any specific plans for the future? There are a lot of good things on the itinerary for 2017, but unfortunately, I cannot reveal them yet. So stay tuned! www.sunglitters.bandcamp.com