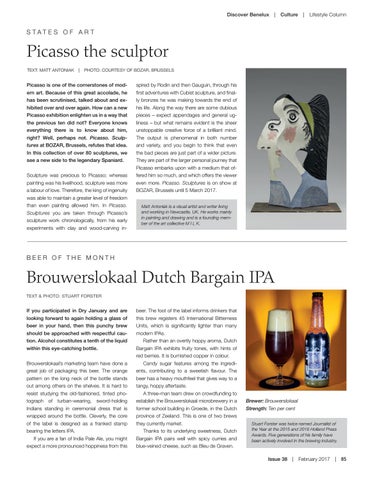 Picasso is one of the cornerstones of modern art. Because of this great accolade, he has been scrutinised, talked about and exhibited over and over again. How can a new Picasso exhibition enlighten us in a way that the previous ten did not? Everyone knows everything there is to know about him, right? Well, perhaps not. Picasso. Sculptures at BOZAR, Brussels, refutes that idea. In this collection of over 80 sculptures, we see a new side to the legendary Spaniard. Sculpture was precious to Picasso; whereas painting was his livelihood, sculpture was more a labour of love. Therefore, the king of ingenuity was able to maintain a greater level of freedom than even painting allowed him. In Picasso. Sculptures you are taken through Picasso’s sculpture work chronologically, from his early experiments with clay and wood-carving in-

spired by Rodin and then Gauguin, through his first adventures with Cubist sculpture, and finally bronzes he was making towards the end of his life. Along the way there are some dubious pieces – expect appendages and general ugliness – but what remains evident is the sheer unstoppable creative force of a brilliant mind. The output is phenomenal in both number and variety, and you begin to think that even the bad pieces are just part of a wider picture. They are part of the larger personal journey that Picasso embarks upon with a medium that offered him so much, and which offers the viewer even more. Picasso. Sculptures is on show at BOZAR, Brussels until 5 March 2017. Matt Antoniak is a visual artist and writer living and working in Newcastle, UK. He works mainly in painting and drawing and is a founding member of the art collective M I L K.

If you participated in Dry January and are looking forward to again holding a glass of beer in your hand, then this punchy brew should be approached with respectful caution. Alcohol constitutes a tenth of the liquid within this eye-catching bottle. Brouwerslokaal’s marketing team have done a great job of packaging this beer. The orange pattern on the long neck of the bottle stands out among others on the shelves. It is hard to resist studying the old-fashioned, tinted photograph of turban-wearing, sword-holding Indians standing in ceremonial dress that is wrapped around the bottle. Cleverly, the core of the label is designed as a franked stamp bearing the letters IPA. If you are a fan of India Pale Ale, you might expect a more pronounced hoppiness from this

beer. The foot of the label informs drinkers that this brew registers 45 International Bitterness Units, which is significantly lighter than many modern IPAs. Rather than an overtly hoppy aroma, Dutch Bargain IPA exhibits fruity tones, with hints of red berries. It is burnished copper in colour. Candy sugar features among the ingredients, contributing to a sweetish flavour. The beer has a heavy mouthfeel that gives way to a tangy, hoppy aftertaste. A three-man team drew on crowdfunding to establish the Brouwerslokaal microbrewery in a former school building in Groede, in the Dutch province of Zeeland. This is one of two brews they currently market. Thanks to its underlying sweetness, Dutch Bargain IPA pairs well with spicy curries and blue-veined cheese, such as Bleu de Graven.

Brewer: Brouwerslokaal Strength: Ten per cent Stuart Forster was twice named Journalist of the Year at the 2015 and 2016 Holland Press Awards. Five generations of his family have been actively involved in the brewing industry.