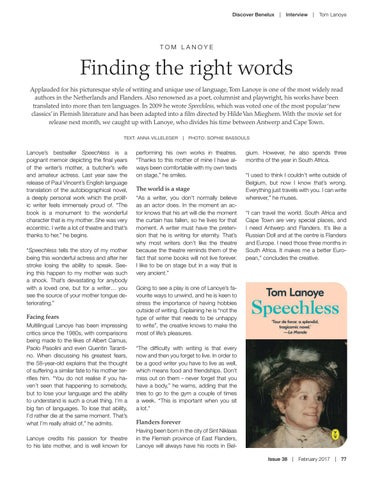 Finding the right words Applauded for his picturesque style of writing and unique use of language, Tom Lanoye is one of the most widely read authors in the Netherlands and Flanders. Also renowned as a poet, columnist and playwright, his works have been translated into more than ten languages. In 2009 he wrote Speechless, which was voted one of the most popular ‘new classics’ in Flemish literature and has been adapted into a film directed by Hilde Van Mieghem. With the movie set for release next month, we caught up with Lanoye, who divides his time between Antwerp and Cape Town. TEXT: ANNA VILLELEGER  |  PHOTO: SOPHIE BASSOULS

Lanoye’s bestseller Speechless is a poignant memoir depicting the final years of the writer’s mother, a butcher’s wife and amateur actress. Last year saw the release of Paul Vincent’s English language translation of the autobiographical novel, a deeply personal work which the prolific writer feels immensely proud of. “The book is a monument to the wonderful character that is my mother. She was very eccentric. I write a lot of theatre and that’s thanks to her,” he begins. “Speechless tells the story of my mother being this wonderful actress and after her stroke losing the ability to speak. Seeing this happen to my mother was such a shock. That’s devastating for anybody with a loved one, but for a writer… you see the source of your mother tongue deteriorating.”

Facing fears Multilingual Lanoye has been impressing critics since the 1980s, with comparisons being made to the likes of Albert Camus, Paolo Pasolini and even Quentin Tarantino. When discussing his greatest fears, the 58-year-old explains that the thought of suffering a similar fate to his mother terrifies him. “You do not realise if you haven’t seen that happening to somebody, but to lose your language and the ability to understand is such a cruel thing. I’m a big fan of languages. To lose that ability, I’d rather die at the same moment. That’s what I’m really afraid of,” he admits. Lanoye credits his passion for theatre to his late mother, and is well known for

performing his own works in theatres. “Thanks to this mother of mine I have always been comfortable with my own texts on stage,” he smiles.

The world is a stage “As a writer, you don’t normally believe as an actor does. In the moment an actor knows that his art will die the moment the curtain has fallen, so he lives for that moment. A writer must have the pretension that he is writing for eternity. That’s why most writers don’t like the theatre because the theatre reminds them of the fact that some books will not live forever. I like to be on stage but in a way that is very ancient.”

gium. However, he also spends three months of the year in South Africa. “I used to think I couldn’t write outside of Belgium, but now I know that’s wrong. Everything just travels with you. I can write wherever,” he muses. “I can travel the world. South Africa and Cape Town are very special places, and I need Antwerp and Flanders. It’s like a Russian Doll and at the centre is Flanders and Europe. I need those three months in South Africa. It makes me a better European,” concludes the creative.

Going to see a play is one of Lanoye’s favourite ways to unwind, and he is keen to stress the importance of having hobbies outside of writing. Explaining he is “not the type of writer that needs to be unhappy to write”, the creative knows to make the most of life’s pleasures. “The difficulty with writing is that every now and then you forget to live. In order to be a good writer you have to live as well, which means food and friendships. Don’t miss out on them - never forget that you have a body,” he warns, adding that the tries to go to the gym a couple of times a week. “This is important when you sit a lot.”

Flanders forever Having been born in the city of Sint Niklaas in the Flemish province of East Flanders, Lanoye will always have his roots in BelIssue 38  |  February 2017  |  77