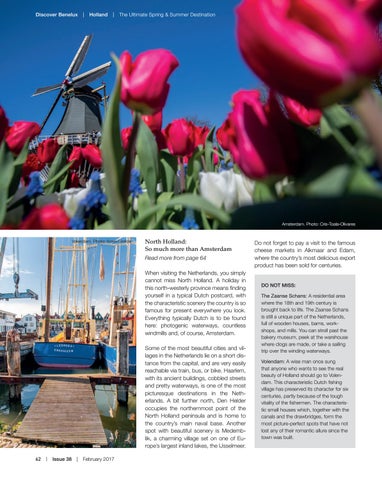 North Holland: So much more than Amsterdam Read more from page 64 When visiting the Netherlands, you simply cannot miss North Holland. A holiday in this north-westerly province means finding yourself in a typical Dutch postcard, with the characteristic scenery the country is so famous for present everywhere you look. Everything typically Dutch is to be found here: photogenic waterways, countless windmills and, of course, Amsterdam. Some of the most beautiful cities and villages in the Netherlands lie on a short distance from the capital, and are very easily reachable via train, bus, or bike. Haarlem, with its ancient buildings, cobbled streets and pretty waterways, is one of the most picturesque destinations in the Netherlands. A bit further north, Den Helder occupies the northernmost point of the North Holland peninsula and is home to the country’s main naval base. Another spot with beautiful scenery is Medemblik, a charming village set on one of Europe’s largest inland lakes, the IJsselmeer.

Do not forget to pay a visit to the famous cheese markets in Alkmaar and Edam, where the country’s most delicious export product has been sold for centuries. DO NOT MISS: The Zaanse Schans: A residential area where the 18th and 19th century is brought back to life. The Zaanse Schans is still a unique part of the Netherlands, full of wooden houses, barns, workshops, and mills. You can stroll past the bakery museum, peek at the warehouse where clogs are made, or take a sailing trip over the winding waterways. Volendam: A wise man once sung that anyone who wants to see the real beauty of Holland should go to Volendam. This characteristic Dutch fishing village has preserved its character for six centuries, partly because of the tough vitality of the fishermen. The characteristic small houses which, together with the canals and the drawbridges, form the most picture-perfect spots that have not lost any of their romantic allure since the town was built.