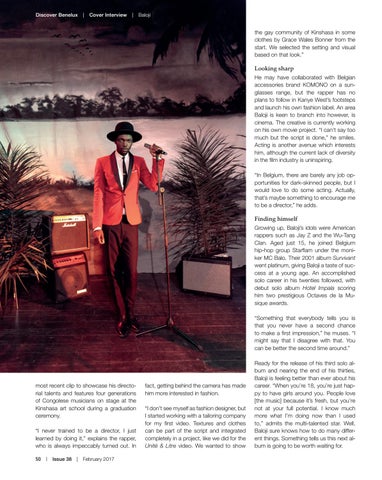 the gay community of Kinshasa in some clothes by Grace Wales Bonner from the start. We selected the setting and visual based on that look.”

Looking sharp He may have collaborated with Belgian accessories brand KOMONO on a sunglasses range, but the rapper has no plans to follow in Kanye West’s footsteps and launch his own fashion label. An area Baloji is keen to branch into however, is cinema. The creative is currently working on his own movie project. “I can’t say too much but the script is done,” he smiles. Acting is another avenue which interests him, although the current lack of diversity in the film industry is uninspiring. “In Belgium, there are barely any job opportunities for dark-skinned people, but I would love to do some acting. Actually, that’s maybe something to encourage me to be a director,” he adds.

Finding himself Growing up, Baloji’s idols were American rappers such as Jay Z and the Wu-Tang Clan. Aged just 15, he joined Belgium hip-hop group Starflam under the moniker MC Balo. Their 2001 album Survivant went platinum, giving Baloji a taste of success at a young age. An accomplished solo career in his twenties followed, with debut solo album Hotel Impala scoring him two prestigious Octaves de la Musique awards. “Something that everybody tells you is that you never have a second chance to make a first impression,” he muses. “I might say that I disagree with that. You can be better the second time around.”

most recent clip to showcase his directorial talents and features four generations of Congolese musicians on stage at the Kinshasa art school during a graduation ceremony. “I never trained to be a director, I just learned by doing it,” explains the rapper, who is always impeccably turned out. In 50  |  Issue 38  |  February 2017

fact, getting behind the camera has made him more interested in fashion. “I don’t see myself as fashion designer, but I started working with a tailoring company for my first video. Textures and clothes can be part of the script and integrated completely in a project, like we did for the Unité & Litre video. We wanted to show

Ready for the release of his third solo album and nearing the end of his thirties, Baloji is feeling better than ever about his career. “When you’re 18, you’re just happy to have girls around you. People love [the music] because it’s fresh, but you’re not at your full potential. I know much more what I’m doing now than I used to,” admits the multi-talented star. Well, Baloji sure knows how to do many different things. Something tells us this next album is going to be worth waiting for.