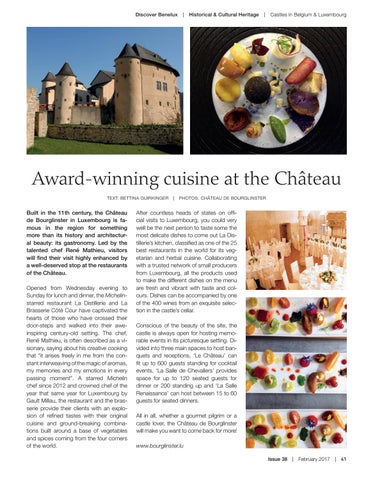 Built in the 11th century, the Château de Bourglinster in Luxembourg is famous in the region for something more than its history and architectural beauty: its gastronomy. Led by the talented chef René Mathieu, visitors will find their visit highly enhanced by a well-deserved stop at the restaurants of the Château. Opened from Wednesday evening to Sunday for lunch and dinner, the Michelinstarred restaurant La Distillerie and La Brasserie Côté Cour have captivated the hearts of those who have crossed their door-steps and walked into their aweinspiring century-old setting. The chef, René Mathieu, is often described as a visionary, saying about his creative cooking that “it arises freely in me from the constant interweaving of the magic of aromas, my memories and my emotions in every passing moment”. A starred Michelin chef since 2012 and crowned chef of the year that same year for Luxembourg by Gault Millau, the restaurant and the brasserie provide their clients with an explosion of refined tastes with their original cuisine and ground-breaking combinations built around a base of vegetables and spices coming from the four corners of the world.

After countless heads of states on official visits to Luxembourg, you could very well be the next person to taste some the most delicate dishes to come out La Distillerie’s kitchen, classified as one of the 25 best restaurants in the world for its vegetarian and herbal cuisine. Collaborating with a trusted network of small producers from Luxembourg, all the products used to make the different dishes on the menu are fresh and vibrant with taste and colours. Dishes can be accompanied by one of the 400 wines from an exquisite selection in the castle’s cellar. Conscious of the beauty of the site, the castle is always open for hosting memorable events in its picturesque setting. Divided into three main spaces to host banquets and receptions, ‘Le Château’ can fit up to 600 guests standing for cocktail events, ‘La Salle de Chevaliers’ provides space for up to 120 seated guests for dinner or 200 standing up and ‘La Salle Renaissance’ can host between 15 to 60 guests for seated dinners. All in all, whether a gourmet pilgrim or a castle lover, the Château de Bourglinster will make you want to come back for more! www.bourglinster.lu Issue 38  |  February 2017  |  41