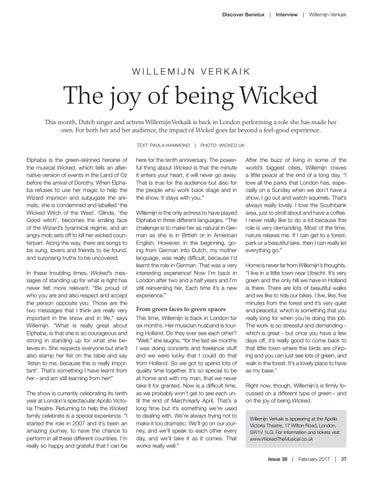 The joy of being Wicked This month, Dutch singer and actress Willemijn Verkaik is back in London performing a role she has made her own. For both her and her audience, the impact of Wicked goes far beyond a feel-good experience. TEXT: PAULA HAMMOND  |  PHOTO: WICKED UK

Elphaba is the green-skinned heroine of the musical Wicked, which tells an alternative version of events in the Land of Oz before the arrival of Dorothy. When Elphaba refuses to use her magic to help the Wizard imprison and subjugate the animals, she is condemned and labelled ‘the Wicked Witch of the West’. Glinda, ‘the Good witch’, becomes the smiling face of the Wizard’s tyrannical regime, and an angry mob sets off to kill her wicked counterpart. Along the way, there are songs to be sung, lovers and friends to be found, and surprising truths to be uncovered. In these troubling times, Wicked’s messages of standing up for what is right has never felt more relevant. “Be proud of who you are and also respect and accept the person opposite you. Those are the two messages that I think are really very important in the show and in life,” says Willemijn. “What is really great about Elphaba, is that she is so courageous and strong in standing up for what she believes in. She respects everyone but she’ll also stamp her fist on the table and say ‘listen to me, because this is really important’. That’s something I have learnt from her - and am still learning from her!” The show is currently celebrating its tenth year at London’s spectacular Apollo Victoria Theatre. Returning to help the Wicked family celebrate is a special experience. “I started the role in 2007 and it’s been an amazing journey, to have the chance to perform in all these different countries. I’m really so happy and grateful that I can be

here for the tenth anniversary. The powerful thing about Wicked is that the minute it enters your heart, it will never go away. That is true for the audience but also for the people who work back stage and in the show. It stays with you.” Willemijn is the only actress to have played Elphaba in three different languages. “The challenge is to make her as natural in German as she is in British or in American English. However, in the beginning, going from German into Dutch, my mother language, was really difficult, because I’d learnt the role in German. That was a very interesting experience! Now I’m back in London after two and a half years and I’m still reinventing her. Each time it’s a new experience.”

From green faces to green spaces This time, Willemijn is back in London for six months. Her musician husband is touring Holland. Do they ever see each other? “Well,” she laughs, “for the last six months I was doing concerts and freelance stuff and we were lucky that I could do that from Holland. So we got to spend lots of quality time together. It’s so special to be at home and with my man, that we never take it for granted. Now is a difficult time, as we probably won’t get to see each until the end of March/early April. That’s a long time but it’s something we’re used to dealing with. We’re always trying not to make it too dramatic. We’ll go on our journey, and we’ll speak to each other every day, and we’ll take it as it comes. That works really well.”

After the buzz of living in some of the world’s biggest cities, Willemijn craves a little peace at the end of a long day. “I love all the parks that London has, especially on a Sunday when we don’t have a show, I go out and watch squirrels. That’s always really lovely. I love the Southbank area, just to stroll about and have a coffee. I never really like to do a lot because this role is very demanding. Most of the time, nature relaxes me. If I can get to a forest, park or a beautiful lake, then I can really let everything go.” Home is never far from Willemijn’s thoughts. “I live in a little town near Utrecht. It’s very green and the only hill we have in Holland is there. There are lots of beautiful walks and we like to ride our bikes. I live, like, five minutes from the forest and it’s very quiet and peaceful, which is something that you really long for when you’re doing this job. The work is so stressful and demanding which is great - but once you have a few days off, it’s really good to come back to that little town where the birds are chirping and you can just see lots of green, and walk in the forest. It’s a lovely place to have as my base.” Right now, though, Willemijn’s is firmly focussed on a different type of green - and on the joy of being Wicked. Willemijn Verkaik is appearing at the Apollo Victoria Theatre, 17 Wilton Road, London, SW1V 1LG. For information and tickets visit: www.WickedTheMusical.co.uk