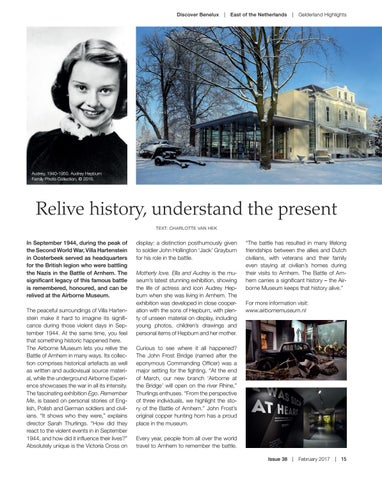 In September 1944, during the peak of the Second World War, Villa Hartenstein in Oosterbeek served as headquarters for the British legion who were battling the Nazis in the Battle of Arnhem. The significant legacy of this famous battle is remembered, honoured, and can be relived at the Airborne Museum. The peaceful surroundings of Villa Hartenstein make it hard to imagine its significance during those violent days in September 1944. At the same time, you feel that something historic happened here. The Airborne Museum lets you relive the Battle of Arnhem in many ways. Its collection comprises historical artefacts as well as written and audiovisual source material, while the underground Airborne Experience showcases the war in all its intensity. The fascinating exhibition Ego. Remember Me, is based on personal stories of English, Polish and German soldiers and civilians. “It shows who they were,” explains director Sarah Thurlings. “How did they react to the violent events in in September 1944, and how did it influence their lives?” Absolutely unique is the Victoria Cross on

display: a distinction posthumously given to soldier John Hollington ‘Jack’ Grayburn for his role in the battle. Motherly love. Ella and Audrey is the museum’s latest stunning exhibition, showing the life of actress and icon Audrey Hepburn when she was living in Arnhem. The exhibition was developed in close cooperation with the sons of Hepburn, with plenty of unseen material on display, including young photos, children’s drawings and personal items of Hepburn and her mother.

“The battle has resulted in many lifelong friendships between the allies and Dutch civilians, with veterans and their family even staying at civilian’s homes during their visits to Arnhem. The Battle of Arnhem carries a significant history – the Airborne Museum keeps that history alive.” For more information visit: www.airbornemuseum.nl

Curious to see where it all happened? The John Frost Bridge (named after the eponymous Commanding Officer) was a major setting for the fighting. “At the end of March, our new branch ‘Airborne at the Bridge’ will open on the river Rhine,” Thurlings enthuses. “From the perspective of three individuals, we highlight the story of the Battle of Arnhem.” John Frost’s original copper hunting horn has a proud place in the museum. Every year, people from all over the world travel to Arnhem to remember the battle. Issue 38  |  February 2017  |  15