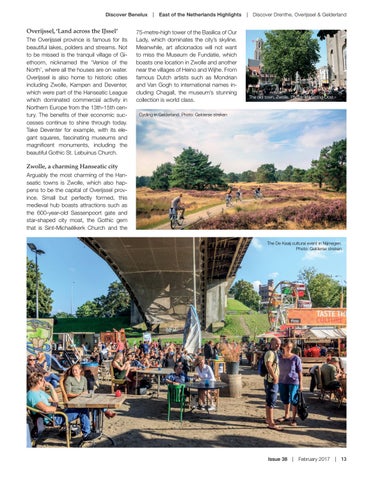 Overijssel, ‘Land across the IJssel’ The Overijssel province is famous for its beautiful lakes, polders and streams. Not to be missed is the tranquil village of Giethoorn, nicknamed the ‘Venice of the North’, where all the houses are on water. Overijssel is also home to historic cities including Zwolle, Kampen and Deventer, which were part of the Hanseatic League which dominated commercial activity in Northern Europe from the 13th-15th century. The benefits of their economic successes continue to shine through today. Take Deventer for example, with its elegant squares, fascinating museums and magnificent monuments, including the beautiful Gothic St. Lebuinus Church.

75-metre-high tower of the Basilica of Our Lady, which dominates the city’s skyline. Meanwhile, art aficionados will not want to miss the Museum de Fundatie, which boasts one location in Zwolle and another near the villages of Heino and Wijhe. From famous Dutch artists such as Mondrian and Van Gogh to international names including Chagall, the museum’s stunning collection is world class.

Zwolle, a charming Hanseatic city Arguably the most charming of the Hanseatic towns is Zwolle, which also happens to be the capital of Overijssel province. Small but perfectly formed, this medieval hub boasts attractions such as the 600-year-old Sassenpoort gate and star-shaped city moat, the Gothic gem that is Sint-Michaëlkerk Church and the The De Kaaij cultural event in Nijmegen. Photo: Gelderse streken